The Cleveland Fed released the median CPI and the trimmed-mean CPI this morning:

Note: The Cleveland Fed released the median CPI details for March here.  Motor fuel was down 45% annualized in March. 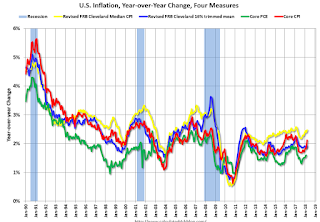 This graph shows the year-over-year change for these four key measures of inflation. On a year-over-year basis, the median CPI rose 2.5%, the trimmed-mean CPI rose 1.9%, and the CPI less food and energy rose 2.1%. Core PCE is for February and increased 1.5% year-over-year.