“What Frequency Are You On” – Sunday Negotiation Insight

“The frequency you’re tuned to determines what you hear and how you act. Be attuned to the frequency that serves you best, when it’s the best that you need to serve you.” –Greg Williams, The Master Negotiator & Body Language Expert 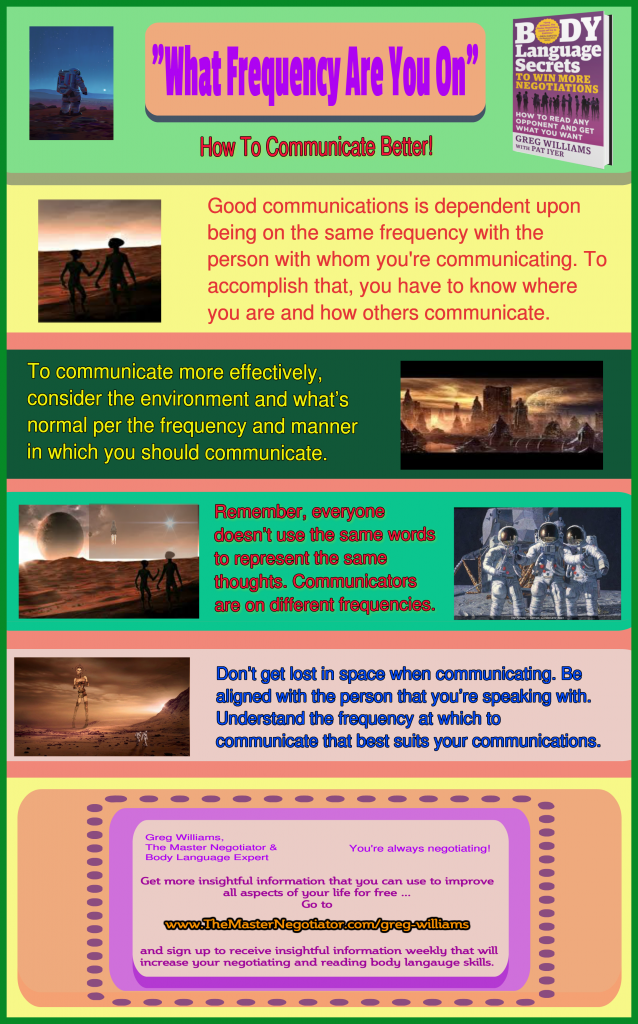 “What Frequency Are You On”

“… We just can’t seem to #communicate! I don’t know what’s wrong with you.” Such were the sentiments of one person to the other.

One way to determine that you’re on the same frequency is by the energy level you experience. A higher energy level of experience denotes a positive flow, while a low level can be the signal of miscommunications. A low level also tends to drain people of their energy.

The next time you’re engaged in what you determine to be a serious conversation, note the level of energy present. Even if you’re discussing something of sorrow or glee, they’ll be a degree of energy that’s locked into the exchange of thoughts and ideas. As long as you can relate that energy to being on the same frequency, you’ll know, at least, that you’re really communicating with the other party. If you observe a whimsical appearance, displays of confusion, or any sign that the person with whom you’re speaking is not getting your message, that will be an indication that there’s a frequency mismatch. That should also serve as a signal to reconnect; you’ve lost your WiFi.

When it comes to frequency, the better you and your partner are attuned to the same station, the greater the chance you’ll communicate at a higher level than otherwise would be the case … and everything will be right with the world.

In every negotiation, the outcome rest on your ability to communicate effectively with your counterpart. Some people don’t communicate as efficiently, because they allow mitigating circumstances to sideline their efforts. That can come in the form of not liking someone appearance, ethnicity, gender, etc.

What are you thinking? I’d really like to know. Reach me at Greg@TheMasterNegotiator.com

The post “What Frequency Are You On” – Sunday Negotiation Insight appeared first on The Master Negotiator & Body Language Expert.

Feb 4, 2021
If you want a truly secure device backup and you have a Windows machine. Learn how to encrypt local backups of iPhone or iPad on Windows.
Tutorial