“To assess the power of your words, taste them before offering them to others. If they taste bitter, consider whether to present them and if so, when.” –Greg Williams, The Master Negotiator & Body Language Expert 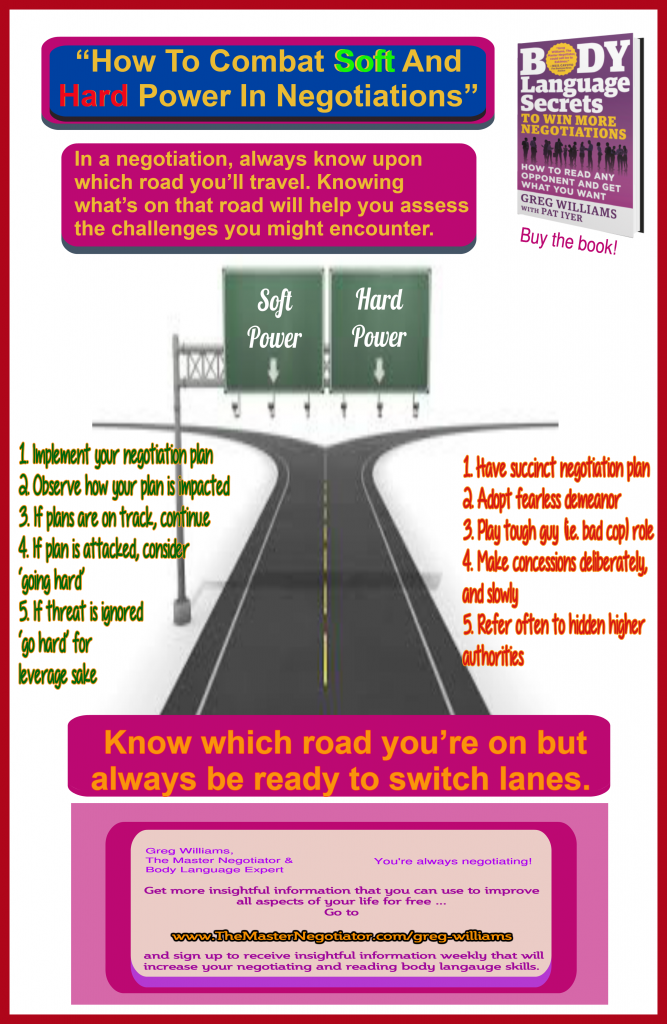 “How To Combat Soft And Hard Power In Negotiations”

Do you know how to #combat soft and hard #power in #negotiations? Can you identify when either is being used in a negotiation?

Everyone seeks power in a negotiation. That power may stem from the influence that one negotiator has over the other, or it may stem from an external source. Regardless of the power source, good negotiators are aware that there are different kinds of power. Great negotiators know there’s a difference, and they also know how to use and combat soft and hard power in negotiations.

This article defines and discusses the points of hard versus soft power and their usage in a negotiation.

Soft power is denoted by the efforts to shape someone’s perspective through the use of positive persuasion. Magnification occurs by shaping the preferences of others through appeal and attraction. Its usage is employed in an attempt to mold the other negotiator’s perspective by cajoling him. Soft power is distinguished from hard power by the lack of coercion used to accomplish goals.

One might initially think that there’s nothing to fear from this type of power, but there is. This type of power can lull you into a false sense of security. Then, after you’ve been subdued, shrewd negotiators may move towards a hard power strategy, leaving you wondering what occurred.

To offset usage of soft power:

Soft power is best utilized when you’re in a power position in a negotiation. Even then, it should only be used against a non-hardnosed negotiator (i.e. a negotiator that will fight about everything because he only wins if you totally lose).

Hard power is denoted by a user’s attempts to persuade by using coercion in an effort to influence the other negotiator. Coercion can be in the form of intimidation, bullying, bribes, threats, or other perceived negative actions to influence someone.

First, know with whom you’re negotiating. That will give you insight into the probability of how he’ll negotiate with you. The user of this ploy will be someone that believes and/or loves to be and be perceived, as a tough negotiator.

To combat this type of power:

One should be cautious about using hard power. Some negotiators will react erratically when confronted by someone that they perceive as trying to harass them through the use of this type of power. Its best implementation is employed in situations where the opposing negotiator adopts a ‘take no prisoners’ position. It can also be used when the other negotiator attempts to reach beyond his grasp in an effort to bedevil you.

The degree that you choose to combat soft or hard power in a negotiation will be dependent upon the personality type of the other negotiator. If he’s a hardnosed negotiator, he may employ this tactic simply to test you. Based on one’s personality and penchant for angst, a stronger versus not so strong response will work. If you know the difference between the two types of power and when to use one versus the other, you’ll increase your negotiation outcomes … and everything will be right with the world.

The post “How To Combat Soft And Hard Power In Negotiations” – Negotiation Tip of the Week appeared first on The Master Negotiator & Body Language Expert.

6 Negotiation Skills All Professionals Should Learn