My first book, published 25 years ago 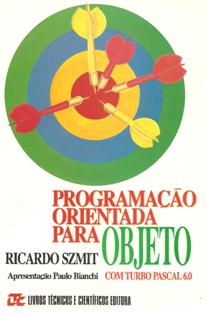 I wrote my first book when I was 20 years old. It was the first book in Portuguese about Object-Oriented Programming (OOP). At the time I was a student at the Federal University of Rio de Janeiro, also known as UFRJ (Universidade Federal do Rio de Janeiro).

You may ask: what makes a young student think that he should write a book? Actually it wasn’t my idea, I was convinced to write it by one of my teachers, professor Paulo Bianchi. At that time I was considered a “pioneer” using OOP on my graduation project, and had a good understanding of the application of object-oriented concepts. Then I had this conversation with my teacher:

My teacher: “I would like you to write a class-book about Object-Oriented-Programming.”

I answered: “I can do that, but this would be lots of work, the same as writing a book.”

My teacher: “You are right. Write a book.”

I still didn’t think that I was able to write a book. So we agreed that I would write the first chapter, then my teacher would review it, and if it was good enough I would write the rest of the book. As you can guess, my teacher really liked the first chapter, made several suggestions for improvements, and then I wrote the additional book chapters.

My book was published in 1992 by a publishing house that specialized in technical books: LTC – Livros Técnicos e Científicos. The book title was “Programação Orientada para Objetos com Turbo Pascal 6.0”. It was published in Brazil and sold also in Portugal. The first edition had 1200 copies, and all of them were sold. You can see the picture of the front-cover above. Note that it was authored under my Brazilian name (Ricardo Szmit), and now I use my Hebrew name.

The first edition had code examples in Turbo Pascal. The publishing house asked me to prepare a second edition using examples in C++. But at that time I was already in Israel, doing my M.Sc. studies at the Technion. I decided that my research was more important than working on a new edition of the book. Also, I already had the feeling that I would never go back to Brazil to enjoy my local reputation as a book author…

Of course I did not make much money from this book, but it was a great experience. I learned to think big, and to never underestimate my own capacity. I hope this serves as an inspiration for young readers of my blog.

What Machine Learning Can Learn from DevOps

The Psychology of Design | Software Designing