“All forms of bullying are not bad. A good bully that defeats a bad bully is good.” -Greg Williams, The Master Negotiator & Body Language Expert 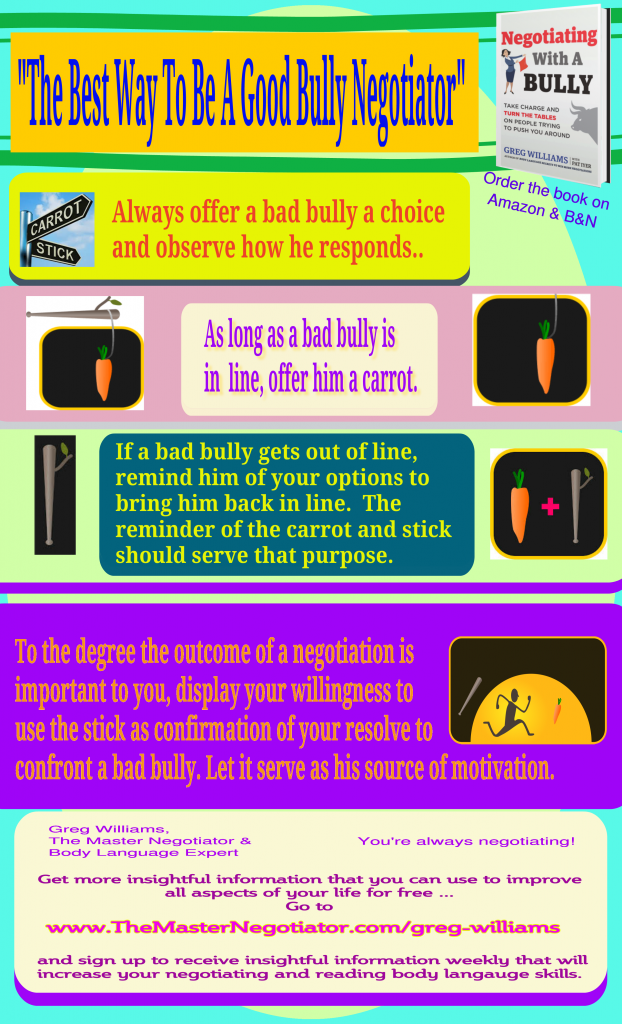 “The Best Way To Be A Good Bully Negotiator”

When you think of bullying in a negotiation, what comes to mind? Do you think of one person using abusive language spewing contempt, or an abundant display of irreverent condescension on behalf of both parties towards the other? In either case or if you didn’t think of either case, you’re right. Bullying in life and in negotiations is open to interpretation. That being the case, there’s a scenario for the role of a good bully in every negotiation. If projected right, the role of a good bully may be laced in the disguise of a savior.

Here’s how you can combat a bad bully by portraying the part of a good bully.

When dealing with a bully, you can be passively aggressive by portraying the part of a hard-nosed negotiator while presenting a pleasant demeanor. That will most likely cause the other negotiator to wonder what he’s dealing with. In that time, you can further assess the value this subterfuge is having on him. Continue using it and/or mixing it with the following as long as it has value.

The role of a good bully truly has a part in any negotiation. While some may call it by another name, know that it’s a role you can partake in to win more negotiations … and everything will be right with the world.

The post “The Best Way To Be A Good Bully Negotiator” – Negotiation Tip of the Week appeared first on The Master Negotiator & Body Language Expert.