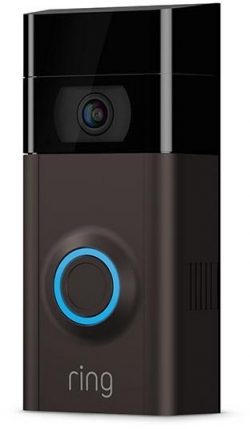 Ring today announced [PDF] that its acquisition by Amazon has been completed, and following the merger, Amazon has permanently dropped the price tag of the entry-level first-generation Ring Video Doorbell.

The Ring Wi-Fi Enabled Video Doorbell is now available from Amazon for $99.99, $50 off of the original $149 MSRP for the accessory. The Video Doorbell, which offers 720p video, is designed to allow you to see and speak to anyone who comes to the door using a connected smartphone.

While the entry-level Ring is available for $99, upgraded versions are more expensive. The Video Doorbell 2 with 1080p resolution is $199, the Video Doorbell Pro, which is hardwired, is $249, and the Video Doorbell Elite, described as a “professional-grade doorbell” is $499. Ring also makes a line of Spotlight and Floodlight Cams.

Ring and Amazon are aiming to cut down on crime in neighborhoods with their partnership, and an LAPD pilot program has suggested the Ring Video Doorbell can reduce burglaries by as much as 55 percent.

“Our mission to reduce crime in neighborhoods has been at the core of everything we do at Ring,” said Jamie Siminoff, CEO and Chief Inventor of Ring. “Together with Amazon, we will accelerate our mission dramatically by connecting more neighbors globally and making our security devices and systems more affordable and accessible. The entire Ring team is excited to continue working hard to create products and services that bring real benefits to people’s lives and build safer communities for all our neighbors.”

Ring has been promising to add HomeKit integration to its products for months now, and the company says that despite its Amazon acquisition, HomeKit support continues to be in the works for the Ring Pro and the Floodlight Cam.

Amazon first announced its acquisition of Ring back in late February, paying over $1 billion for the smart home company. Ring is part of a new smart home strategy for Amazon, and marks Amazon’s second major smart home purchase following its December Blink acquisition.