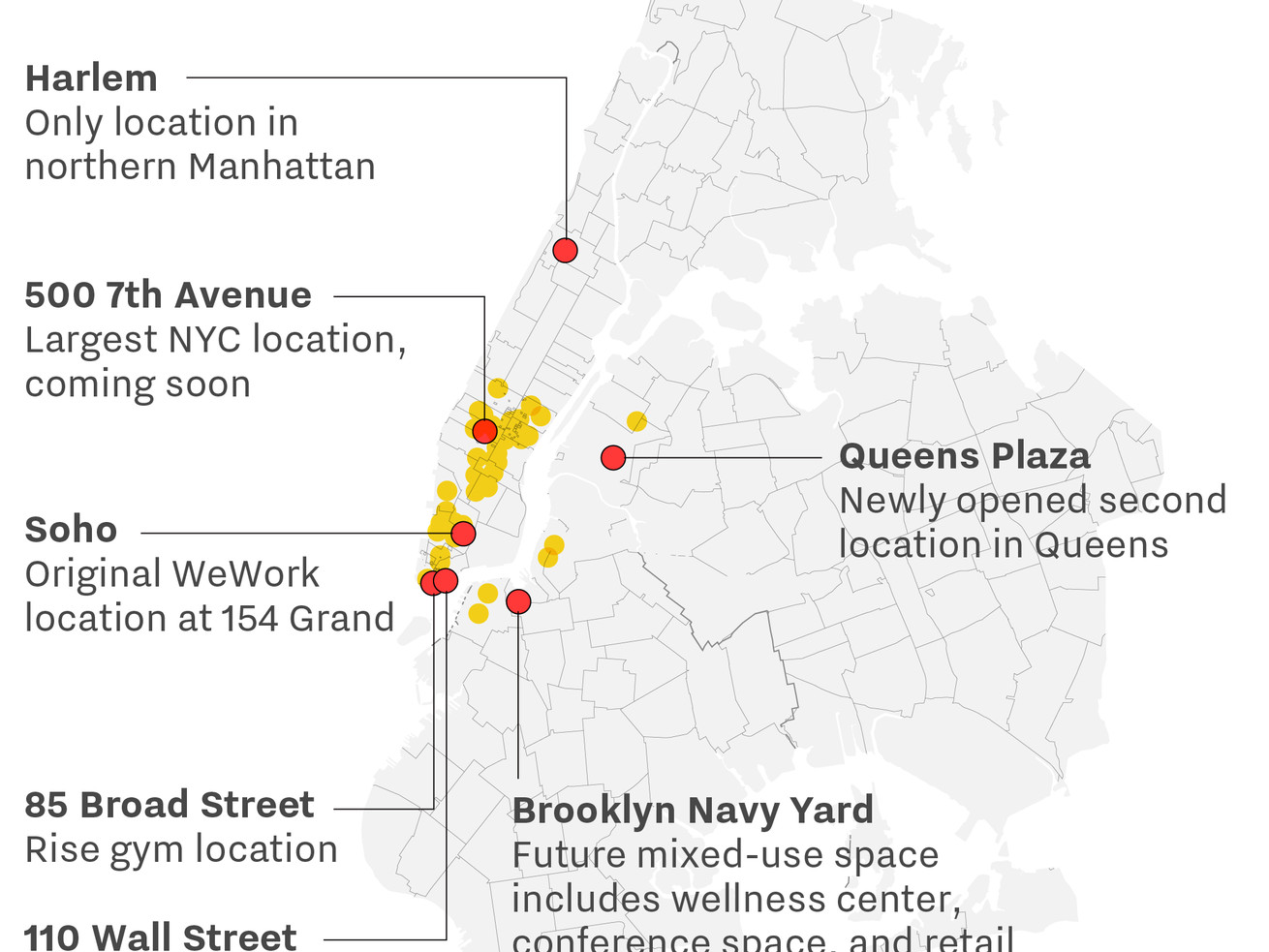 It started out with a single SoHo building in 2010.

Approaching 50 locations in New York City, WeWork has now amassed more Manhattan office space than any other tenant except banking behemoth JPMorgan Chase, according to data from real estate services company Cushman & Wakefield. It was in fourth place just last year. If WeWork leases another 407,356 square feet — roughly eight more typically sized locations — it would be the biggest private office tenant in Manhattan.

In 2017, WeWork opened 10 new locations in the city and already another five are slated to open this year. Thanks in part to a $4.4 billion investment from SoftBank’s Vision Fund, the company expects 2018 to be its biggest growth year yet, estimating an addition of more than 750,000 square feet of office space in New York City.

WeWork currently has 2.9 million square feet of open office space across Manhattan, Brooklyn and Queens, half of which was opened in the past two years. That’s enough to house the current 45,000 members. There are now five WeWorks in SoHo alone.

Each location has a standard set of amenities and perks — beer and microbrew coffee on tap and large, open common spaces — but not all New York WeWorks are created equal. The South Williamsburg location, popular with freelance artists, has a photo studio members can use for shoots, and the Hudson Square location is building an indoor garden. A number of New York City locations also now include workout equipment.

So far, WeWork’s growth in New York City has been concentrated from midtown Manhattan through downtown, including 16 locations just between 34th and 59th Street. WeWork SVP Rui Barros, head of operations for U.S. Canada/East, says the company plans to continue to expand the most in that area.

WeWork says its New York City locations are, on average, 90 percent occupied. Several, including Meatpacking, Chelsea and Bryant Park, are at 100 percent and have wait lists, suggesting there’s still demand to grow its NYC capacity even more.

WeWork has been able to grab this much land this fast by pitching itself as a reliable tenant to landlords, taking on long-term leases that it then subleases to its customers for shorter periods of time. The company will agree to 10- to 15-year lease terms and often share costs in redoing buildings. It has a broker referral program that gives brokers a cut of their clients’ rent for bringing them to WeWork, but will sometimes bypass the broker to cut deals directly with landlords themselves.

Who works at WeWork? Small businesses, fast-growing startups and sole proprietors still represent the majority of clientele, but WeWork has increasingly courted larger businesses. Companies with more than 1,000 employees are WeWork’s fastest-growing segment, often renting overflow or satellite spaces from WeWork. These enterprise clients now make up about 15 percent of WeWork’s New York City membership, up from virtually zero a few years ago.

The result is bigger and bigger WeWorks that can accommodate a wider range of businesses. Currently, Tower 49 near Rockefeller Center is the company’s biggest location in the world, with 188,000 square feet of space, enough for its 3,500 desks to be near 100 percent capacity. It will soon be replaced by 500 Lexington (200,000 sq. ft.) this August and Brooklyn Navy Yard (220,000 sq. ft.) in the fall.

Currently under construction on Dock 72 overlooking the Manhattan skyline, the Brooklyn Navy Yard — that WeWork is developing with Rudin and Boston Properties — will be its largest project yet. WeWork will be the anchor tenant for what amounts to an indoor-outdoor business and shopping center, complete with retail stores, restaurants, a wellness center, an event space and even a dedicated ferry terminal.

Still, WeWork is loath to call itself a real estate company. Instead, the $21 billion company notoriously pitches itself as a lifestyle and a community.

New York, which makes up a fifth of WeWork’s 13 million square foot global footprint, has also become a test area for WeWork’s other businesses. These include a “co-living space” called WeLive that rents around 200 fully furnished apartments, which feels like a fancy dorm for grown-ups, with PacMan machines in the laundry room and a shared rooftop hot tub; a gym called Rise that’s a subterranean oasis, complete with a salt-water spa, personal trainers and an astroturf gym; its WeWork Labs program, which offers mentorship and education for smaller startups; and its upcoming entrepreneurial school for children, WeGrow.