People sometimes ask me some version of the following question:

“Why are you so down on political ads on Facebook and not on TV?”

It’s a reasonable question. The answer has 3 parts:

1. Television advertising is obviously advertising. When we see a TV spot, we know exactly what it is. No one ever mistook a TV spot for a news broadcast. Ads on Facebook, however, look exactly like “content.” It is hard to differentiate an ad from a post or a post from a news item. Consequently, political ads on Facebook often serve as fake news even if they are not intended to be such.

2. On television (and radio) political ads are required to be identified as such. Not on Facebook. Facebook maintains the absurd position that it is not a media company. In fact, it is the largest media company in the history of the world. By saying they are a “platform” or a “tech company” or some other obfuscation, they have exempted themselves from the adult responsibilities that media companies must assume. Amazingly, the governmental authorities have allowed Facebook to get away with this nonsense.

3. Facebook does everything possible to blur the lines. On the web, there is an awful culture of blurring the lines between advertising and content (for some depth on this, you might want to read an excellent book called BadMen.) Facebook is one of the worst offenders. They intentionally use imprecise language — e.g.,“sponsored” instead of “ad” — to describe advertising in our feeds. They use loopholes in their user agreement to imply endorsements when none exist. Here’s an example taken from my Facebook feed… 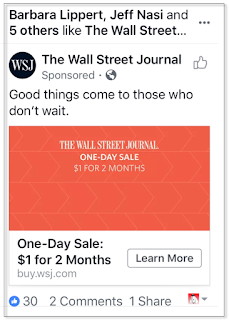 Despite the claim in this ad, I can assure you that Barbara Lippert (whom I know) did not endorse The Wall Street Journal. Nonetheless, Facebook continues to use this squalid practice to confuse people. Once again, the result is that we are never quite sure what is an ad.
Related Posts

Jul 22, 2021
Regardless of one’s political leanings, the corrupting effect of Facebook’s advertising practices have to be regarded as anathema to any idea of responsible political advertising. Couple this with the amount of personal and private information they have amassed about us without our explicit knowledge or consent and you have a very combustible and dangerous mixture.
As I said over 7 years ago…

“There’s no reasonable way that this is a good development for a free society. There is no realistic vision of the future in which this will not lead to appalling mischief.”

The “appalling mischief” arrived in 2016, contaminating our presidential election.

Our elected officials have demonstrated utter incompetence at dealing with this issue. The only hope is that responsible advertisers will force Facebook to clean up its toxic practices by withdrawing advertising money.

Did I say “responsible advertisers?” Yeah, right. This will happen when chickens play checkers.