Building Permits:
Privately-owned housing units authorized by building permits in March were at a seasonally adjusted annual rate of 1,354,000. This is 2.5 percent above the revised February rate of 1,321,000 and is 7.5 percent above the March 2017 rate of 1,260,000. Single-family authorizations in March were at a rate of 840,000; this is 5.5 percent below the revised February figure of 889,000. Authorizations of units in buildings with five units or more were at a rate of 473,000 in March.
emphasis added 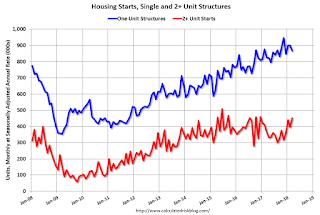 Multi-family is volatile month-to-month, and  has been mostly moving sideways the last few years (although moving up over the last few months)

Single-family starts (blue) decreased in March, and are up 5.2% year-over-year. 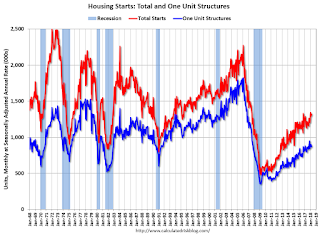 Total housing starts in March were above expectations, and starts for January and February were revised up.