Industrial production rose 0.5 percent in March after increasing 1.0 percent in February; the index advanced 4.5 percent at an annual rate for the first quarter as a whole. After having climbed 1.5 percent in February, manufacturing production edged up 0.1 percent in March. Mining output rose 1.0 percent, mostly as a result of gains in oil and gas extraction and in support activities for mining. The index for utilities jumped 3.0 percent after being suppressed in February by warmer-than-normal temperatures. At 107.2 percent of its 2012 average, total industrial production was 4.3 percent higher in March than it was a year earlier. Capacity utilization for the industrial sector moved up 0.3 percentage point in March to 78.0 percent, a rate that is 1.8 percentage points below its long-run (1972–2017) average.
emphasis added 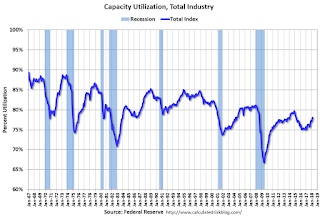 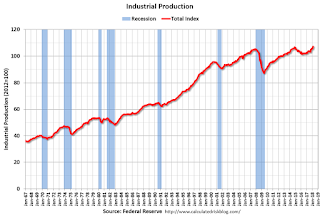 Industrial production increased in March to 107.2. This is 23% above the recession low, and 2% above the pre-recession peak.