The increase in starts was mostly due to the volatile multi-family sector. 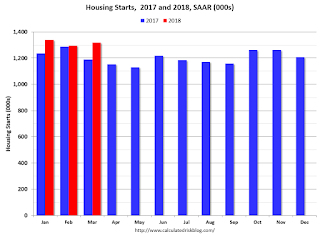 Note that starts in March, April and May of 2017 were weaker than other months, so this was a fairly easy comparison.

Through three months, starts are up 8.0% year-to-date compared to the same period in 2017.

Single family starts were up 5.2% year-over-year, and down 3.7% compared to February.

Multi-family starts were down 23.7% year-over-year, and up 16.1% compared to February (multi-family is volatile month-to-month). 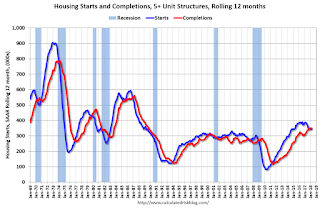 The rolling 12 month total for starts (blue line) increased steadily over the last few years – but has turned down recently.  Completions (red line) have lagged behind – and completions have caught up to starts (more deliveries).

Completions lag starts by about 12 months, so completions will probably turn down in a year or so. 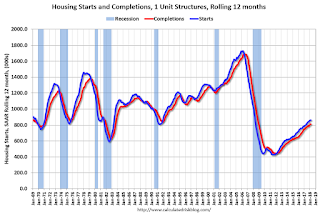