A new version of Drafts, the simple note-taking app from Agile Tortoise, was released today. Drafts 5 stays faithful to its predecessor’s primary goal of allowing users to quickly jot down text, thoughts, ideas, and notes, and builds on these functions by introducing a ground-up rewrite of the app with a raft of new features and customization options.

Agile Tortoise has opted to release Drafts 5 as a standalone app, which means it doesn’t replace Drafts 4, but installs alongside it, allowing users to migrate previous drafts, actions and keyboard customizations from the earlier app. 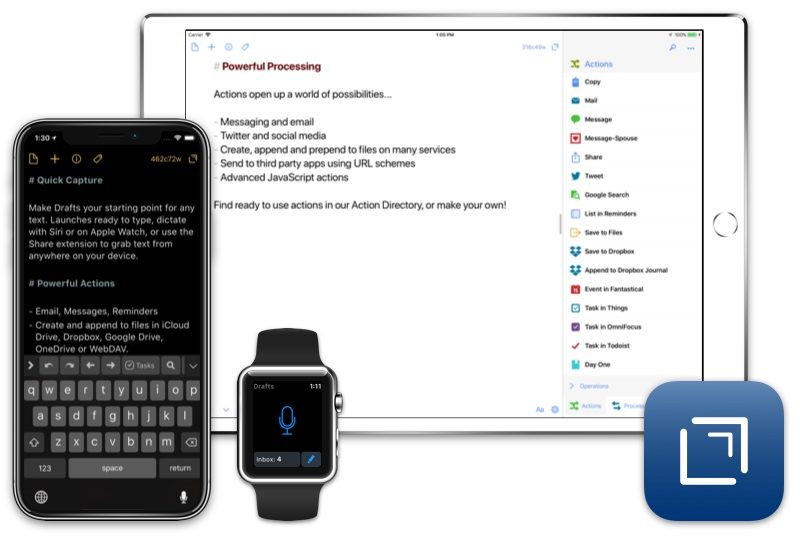 Once they’ve done that, long-time users can look forward to new interface theming options – like the ability to switch between light and dark modes – and granular control of a host of draft appearance settings in the new editor. These include the ability to adjust margins, line height, line numbering, auto-correct, smart quotes/dashes, and more.

Drafts 5 also introduces new organization options with multiple tags, which can be used to filter the draft list and queries for all inbox, archived, and flagged drafts. Elsewhere, a new Focus mode disables the automatic creation of new drafts after a specific time period, allowing users to continue adding to drafts long after they were first created. Siri integration is another new addition in this version, so users can add a note to Drafts by just using their voice.

Elsewhere, there’s enhanced support for inline syntax highlighting for several different types of markup, interactive to-dos, drag and drop support, multiple extended keyboards for grouping actions into categories, a new Action Directory, and automated backup. Small changes have also been made to improve the Apple Watch complication of Drafts 5, which allows dictation and note-taking from the wrist, as well as flagging and tagging of drafts.

The comprehensive list of changes and improvements can be found on the GetDrafts.com website. Drafts for iPhone, iPad and Apple Watch is a free download on the App Store [Direct Link], while Drafts Pro is a universal subscription ($20 per year / $2 per month) that unlocks more features. These include themes, custom icons, editing of actions, saving workspaces and more. According to the developer, Draft 4 will continue to be supported and available, so users can choose to migrate to Drafts 5 if and when they feel they are ready.