The U.S. hotel industry reported record-breaking performance during the first quarter of 2018, according to data from STR.

“The absolute levels for each of the three key performance metrics were the highest STR has ever benchmarked for a Q1,” said Bobby Bowers, STR’s senior VP of operations. “Supply (more than 460 million room nights available) and demand (more than 285 million room nights sold) also reached record levels for a Q1, but demand grew at a much higher rate (+3.0% vs. +2.0%).”

And from HotelNewsNow.com: STR: US hotel results for week ending 14 April

The U.S. hotel industry reported positive year-over-year results in the three key performance metrics during the week of 8-14 April 2018, according to data from STR. In comparison with the week of 9-15 April 2017, the industry recorded the following:

STR analysts note performance growth was boosted by a favorable comparison with the week of Easter in 2017.
emphasis added 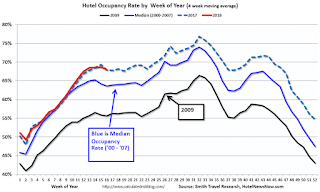 The red line is for 2018, dash light blue is 2017 (record year due to hurricanes), blue is the median, and black is for 2009 (the worst year since the Great Depression for hotels).

Currently the occupancy rate, to date, is slightly ahead of the record year in 2017 (2017 finished strong due to the impact of the hurricanes).