S&P/Case-Shiller released the monthly Home Price Indices for February (“February” is a 3 month average of December, January and February prices).

Seattle, Las Vegas, and San Francisco continue to report the highest year-over-year gains among the 20 cities. In February, Seattle led the way with a 12.7% year-over-year price increase, followed by Las Vegas with an 11.6% increase and San Francisco with a 10.1% increase. Thirteen of the 20 cities reported greater price increases in the year ending February 2018 versus the year ending January 2018.
…
Before seasonal adjustment, the National Index posted a month-over-month gain of 0.4% in February. The 10-City and 20-City Composites both reported increases of 0.7%. After seasonal adjustment, the National Index recorded a 0.5% month-over-month increase in February. The 10-City and 20-City Composites both posted 0.8% month-over-month increases. All 20 cities reported increases in February before and after seasonal adjustment.

“Home prices continue to rise across the country,” says David M. Blitzer, Managing Director and Chairman of the Index Committee at S&P Dow Jones Indices. “The S&P CoreLogic Case-Shiller National Index is up 6.3% in the 12 months through February 2018. Year-over-year prices measured by the National index have increased continuously for the past 70 months, since May 2012. Over that time, the price increases averaged 6% per year. This run, which is still ongoing, compares to the previous long run from January 1992 to February 2007, 182 months, when prices averaged 6.1% annually. With expectations for continued economic growth and further employment gains, the current run of rising prices is likely to continue. 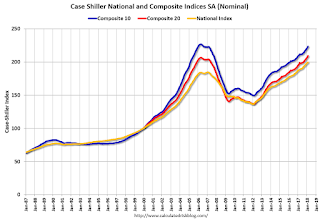 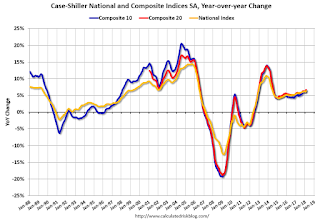 The National index SA is up 6.3% year-over-year.

Note: According to the data, prices increased in all 20 of 20 cities month-over-month seasonally adjusted.