In a new survey conducted by SurveyMonkey and shared by Recode, 11 percent of respondents said that they believe Apple has the most positive impact on society today. Apple came in third place, however, falling in line behind Google at 15 percent and Amazon in the top spot at 20 percent.

Survey respondents were given the option of choosing between a number of technology companies between April 8-9, and it totaled 2,772 adults based in the United States. When asked which company they believe has the most positive impact on society, 20 percent elected to choose “none of the above.”

Despite the ongoing Cambridge Analytica scandal, 10 percent of respondents chose Facebook as having the most positive impact today. Microsoft rounded out the top 5 slots at 7 percent, followed by Tesla at 6 percent, Uber at 3 percent, Netflix at 2 percent, and a list of companies at 1 percent. 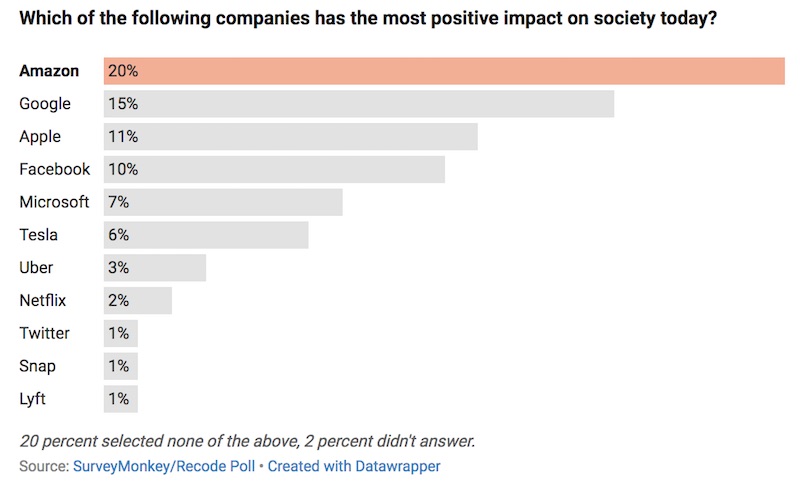 The survey also dived into the CEOs of the companies and asked respondents which leaders had the greatest impact on people’s daily lives. Amazon came in first place again, with 22 percent saying CEO Jeff Bezos and his decisions impact them in some way each day. Google’s Sundar Pichai came in second at 18 percent, and Facebook’s Mark Zuckerberg was third at 17 percent.

Amazon has been a competitor for Apple in a few areas over the last couple of years, particularly in areas like AI assistants and smart home accessory support. Most recently, The Information reported that an increasing number of home builders have opted to go with Alexa-enabled smart homes, rather than install HomeKit products during construction.

A Bloomberg report today claims that Amazon’s next big push into consumer products will be a robot that can navigate around the user’s home “like a self-driving car.” The ultimate purpose of the robot is still unclear, but people familiar with the project believe it to be a “mobile Alexa” that would follow customers into areas of the home that don’t have an Echo device.