Spotify held an event in New York City today, unveiling a new version of its free music streaming tier that introduces a few new features for those users not paying for Spotify’s $9.99/month main subscription plan.

The new free tier allows users to pick and choose which music they want to listen to on-demand, but only if the tracks appear within one of the 15 curated discovery playlists. These include Daily Mix, Discover Weekly, Release Radar, and more. Previously, free tier users were limited to shuffling songs at random. 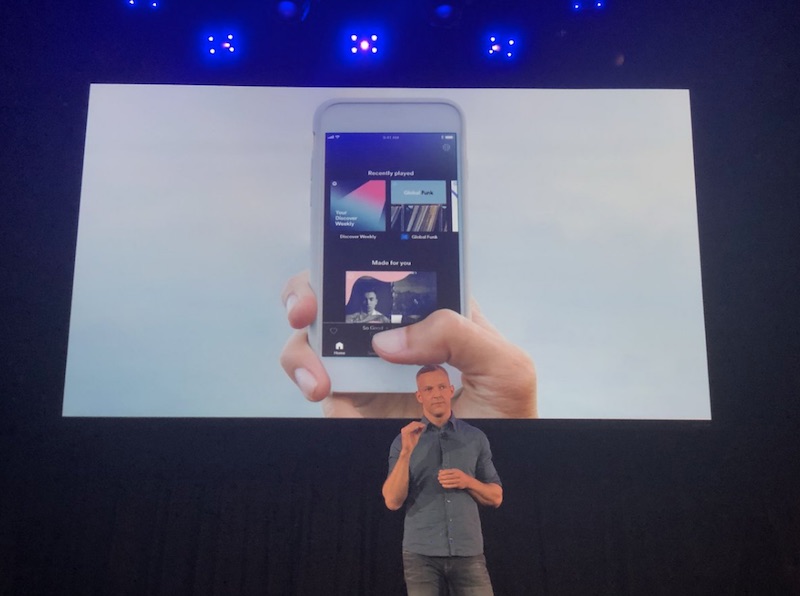 According to TechCrunch, “that’s around 750 tracks (>40 hours of music) that Spotify is serving up to users for on-demand listening.” Additionally, users on the free service will get recommendations based on their own playlists, with machine learning taking into account songs in the playlists and even the name of the playlists. Spotify calls this “assisted playlisting.”

CNET reporter Joan E. Solsman also mentioned that free users will have access to podcasts and vertical videos. Curated playlists, like RapCaviar, will also “stay the same across both tiers” of free and premium users.

There is also a new low-data mode that aims to cut data consumption “by up to 75 percent.” In total, Spotify head of product development, Babar Zafar, said Spotify’s free tier is “becoming much more like Spotify premium” with this update. As a note, the free tier will still have advertisements between songs.

In the past, Spotify didn’t allow offline listening for free, meaning that users were somewhat tethered to wifi if they needed to conserve data.

With the new data consumption system, which caches music ahead of time to stream via 3G, users can actually listen to much more music with wireless data. Alongside utilizing 3G, Spotify is also optimizing the streaming itself as well as the app (including imagery and other UI elements) to save data and power.

As Spotify expands its free service, Apple Music still only offers new subscribers a chance to try things out for three months at no cost. Afterwards, users must pay for a subscription or cancel their plan.

When asked whether the company is worried about losing paying subscribers to the newly expanded free tier, chief product officer Gustav Söderström said that it wasn’t in Spotify’s plans to make a free experience feel worse in order to get them to become paid subscribers. Still, over time the streaming service hopes a more robust free tier turns users into paid subscribers. “The more you play, the more you pay,” Söderström said.

onlyinfotech Aug 5, 2020
Some of the things that lead to success, greater productivity, and goal attainment seem small and insignificant…
B2B Marketing