The case for diversity 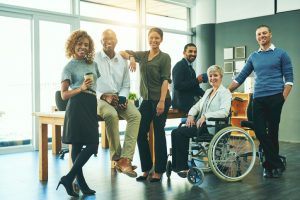 This edition of The Oswald Letter is a guest post from Elizabeth Petersen, Project Director for Simplify Compliance.

While few American businesses self-report on diversity data, workplace discrimination and inclusion are near-daily topics in the media.

In the real world, diversity and inclusion may feel nebulous—nice-to-have goals—but they can easily become deprioritized when weighed against the many other pressing demands of day-to-day organizational operations. However, the call for diversity is becoming louder (especially with younger generations), and the evidence that diversity plays a critical role in business success is mounting.

To underscore the criticality of workplace diversity, let’s take a look at how inclusion and diversity are tied to corporate performance.

While I’ve thrown a bunch of statistics and studies at you, qualitative and emotional statements on the importance of diversity and inclusion are equally as compelling. One of the most effective testimonies to diversity I’ve ever heard was given by a wildly successful entrepreneur. She recounted that she ultimately ended up leaving an organization because she grew tired of the homogenous corporate culture—especially at the leadership levels. That company ended up losing a passionate, talented employee (and ultimately her million-dollar ideas) because of its head-in-the-sand approach to corporate diversity.

Elizabeth Petersen is a project director at Simplify Compliance. Before her current role, Elizabeth oversaw Simplify Compliance’s healthcare division, HCPro. She also has held roles in HCPro’s sales, product management, and content development departments. Before joining HCPro, she held editorial positions at JBLearning and CCI Communications. Elizabeth lives in the North Shore of Massachusetts with her husband and son and is passionately interested in corporate culture, innovation, women’s leadership, and caffeine.

E-mail Elizabeth your thoughts, questions, comments, and ideas, or connect with her via LinkedIn.

The post The case for diversity appeared first on HR Daily Advisor.