Update: A few comments on the Seasonal Pattern for House Prices

CR Note: This is a repeat of earlier posts with updated graphs. 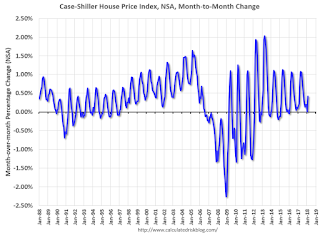 This graph shows the month-to-month change in the NSA Case-Shiller National index since 1987 (through February 2018).   The seasonal pattern was smaller back in the ’90s and early ’00s, and increased once the bubble burst.

The seasonal swings have declined since the bubble. 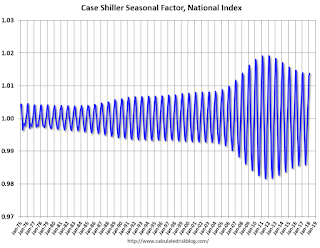 The second graph shows the seasonal factors for the Case-Shiller National index since 1987. The factors started to change near the peak of the bubble, and really increased during the bust.

The swings in the seasonal factors has started to decrease, and I expect that over the next several years – as the percent of distressed sales declines further and recent history is included in the factors – the seasonal factors will move back towards more normal levels.

However, as Kolko noted, there will be a lag with the seasonal factor since it is based on several years of recent data.