Negotiation Tip of the Week

“A bully is someone that attempts to pain you, to relieve the pain in himself.” – Greg Williams, The Master Negotiator & Body Language Expert 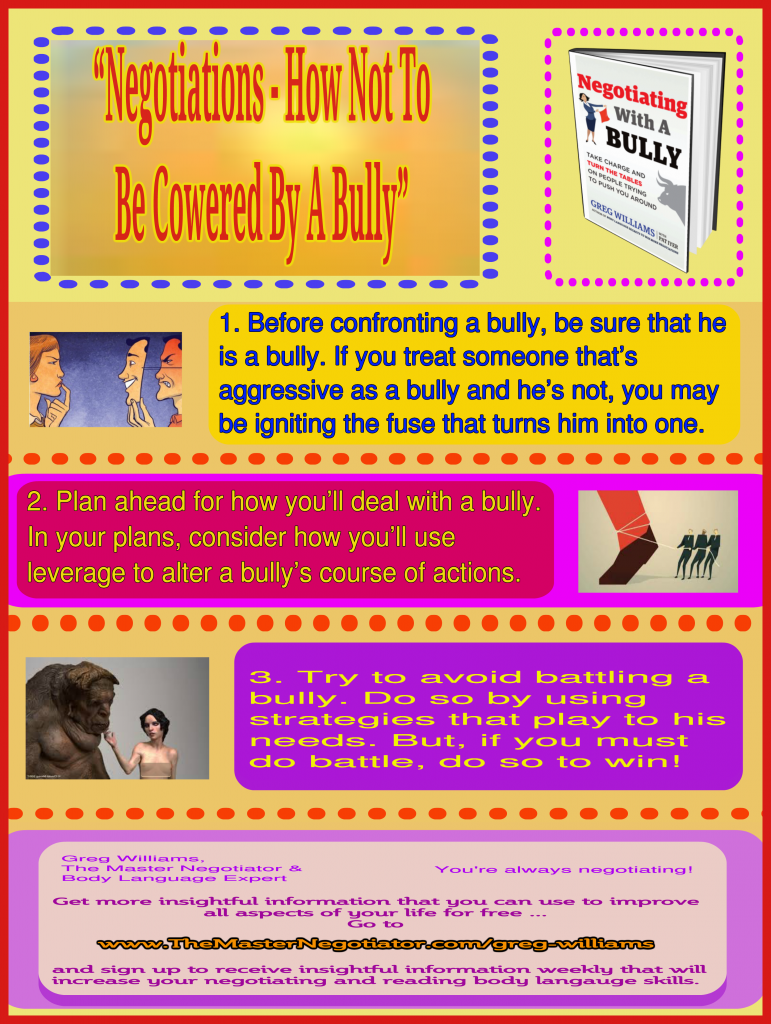 “Negotiations – How Not To Be Cowered By A Bully”

“That was a stupid question!”

Those were the words uttered by someone who considered himself to be superior to the person that posed the question. Such a response can also be the positioning attempts of a bully.

When negotiating, you need to know how not to be cowered by a bully. Doing so will allow you to negotiate more effectively, maintain a more peaceful state of mind, and reduce the overall level of stress you might possess at the negotiation table.

This article discloses insights that will allow you to be better prepared to deal with a bully in your negotiations. It can also serve as a booster for your degree of confidence when dealing with such a person.

Know when someone is truly attempting to bully you.

As I’ve stated in other articles that I’ve written, before assuming someone is attempting to bully you, be sure your assumptions are accurate. This can be accomplished by asking outright if the other negotiator is trying to bully you and/or stating that you feel bullied; the choice you adopt will be dependent on the type of person you’re engaged with. In the case of someone that’s just aggressive, and not a bully, if you state that you’re feeling bullied and say so with a smile on your face, that may alert him that he needs to become subdued.

Understand the thought process behind a bully’s effort to bully you.

You also need to understand what a bully thinks of you. Ask yourself, does he perceive me to be an easy target, someone that will back down at the first sign of aggression, or is he testing me to see how I’ll react? Having this insight will reveal the options you might utilize to combat his efforts. You should have gathered information about the bullying efforts that he’s used in other situations, which means you should be prepared for how he might negotiate with you. But, in case you haven’t, be nimble enough to have strategies at the ready, to deter his bullying attempts.

Consider his source of leverage/power.

Power is fluid. That means it changes from moment to moment. If you understand the source of his power, if you can’t attack him, you can attack it. This is done by letting that source know that it will have a price to pay, as the result of the bullying activities of its associate. Knowing his sources of power will also allow you to gain leverage by simply mentioning the fact that you’re aware of who his ‘backers’ are.

In a negotiation, a bully is as strong as he and you agree he is. Thus, to the degree that either perspective is altered, so is the perspective of the bully’s power. Therefore, if you know you’ll be in an environment in which someone may attempt to bully you, especially if they’ve displayed such tendencies in the past, be prepared with retorts stating, “you don’t want to try that with me. I bite back!” Just be mindful of not escalating a situation passed a point that you can’t control. Such rebukes will allay the bully’s perspective and thoughts about picking on you, which means, he’ll more than likely engage with you in a more respectful manner … and everything will be right with the world.

The post “Negotiations – How Not To Be Cowered By A Bully” – Negotiation Tip of the Week appeared first on The Master Negotiator & Body Language Expert.