The kind of sustained, rapid home price growth we’ve been seeing in Case-Shiller and other indices for the past few years is enough to give home buyers of all stripes a headache. And don’t expect things to slow down any time soon.
…
The pain this rapid growth is causing is widespread, but is especially acute for first-time and lower-income buyers at the bottom end of the market in search of entry-level homes that are appreciating the fastest, in large part because they are in the most demand.

Competition is fierce, offer windows are short and tensions will inevitably run high for many buyers as the spring shopping season unfolds.

More inventory is the one cure sure to take this edge off, and there are some faint signals in more recent data that a shift may be coming – inventory of existing homes has risen for the past three months, and construction activity is at its highest point in a decade.

But buyers in the market now shouldn’t hold their breath. Even if inventory does begin to recover, it will be rising from incredibly low levels and will likely take years to get back to a more ‘normal’ level.

Zillow predicts the March S&P/Case-Shiller U.S. national index, which will not be released until May 29, will climb 6.5 percent year-over year.

The Zillow forecast is for the year-over-year change for the Case-Shiller National index to be larger in March than in February. 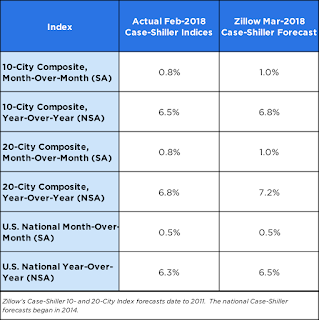