From the Dallas Fed: Growth in Texas Manufacturing Rebounds Strongly

Other indexes of manufacturing activity also rose sharply in April. The new orders and growth rate of orders indexes jumped to their highest readings this year, 27.9 and 18.9, respectively. The capacity utilization index climbed eight points to 18.7, and the shipments index rose nine points to 19.3.

Perceptions of broader business conditions remained highly positive on net in April. The general business activity index was largely unchanged at 21.8, and the company outlook index edged up four points to 23.6. Both indexes remained far above their average levels.

This was the last of the regional Fed surveys for April. 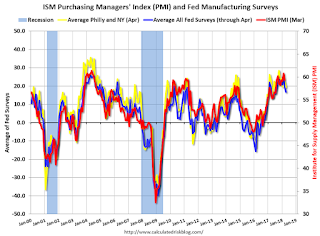 Based on these regional surveys, it seems likely the ISM manufacturing index will be solid again in April, but probably lower than in March (to be released tomorrow, Tuesday, May 1st).