Last Thursday, Apple announced the discontinuation of its AirPort lineup of wireless routers, marking the end of an era that at times saw the company push the boundaries of wireless networking. Apple says it will continue selling the existing AirPort products until supplies are gone, which leaves the Velop mesh system from Linksys as the sole Wi-Fi router product sold by Apple.

Linksys debuted its tri-band Velop system last year, and Apple began selling it around the beginning of this year, priced at $350 for a two-pack or $480 for a three-pack. With a mesh Wi-Fi system, multiple nodes work seamlessly together to provide greater coverage than a traditional access point.

The tri-band Velop system is a bit pricey compared to some other options on the market, but it works well, providing strong coverage throughout your home and offering features such as guest networking, parental controls, and device prioritization.

While the original Linksys Velop remains a highly rated router option and Apple’s third-party system of choice, the fairly high price can be a barrier to entry, and so users who have so far held back from taking the plunge into mesh Wi-Fi networking may be interested to know that Linksys today is launching its lower-cost dual-band Velop system. I’ve had a brief opportunity to try out the new dual-band system, and while it doesn’t have quite the high-end specs of the original tri-band system, it still appears to be a solid option for many users as long as your house isn’t too large, and it comes with a much lower price tag.

I have Google Fiber with a 100/100 Mbps connection in my 1800 square foot home, but my office is at the farthest point from the fiber jack and my Wi-Fi speeds suffer significantly at that distance. Upon activating my Google Fiber service earlier this year, I quickly found that my AirPort Time Capsule provided a stronger signal than Google’s router, so I initially used the Time Capsule to provide my Wi-Fi but even that offered inconsistent performance in my office, occasionally reaching 90/90 Mbps speeds but frequently managing only in the range of 5–10 Mbps despite typically showing full signal bars.

When I moved from the single AirPort access point to the tri-band Velop, I immediately saw full coverage throughout my home using a three-node system including a node in my office, giving me essentially full speed from anywhere in my home.

Linksys touts the tri-band Velop system as covering up to 6,000 square feet at 2,000 square feet per node, so there was plenty of range to spare in my home. The tri-band system offers one 2.4 GHz and two 5 GHz 802.11ac Wi-Fi radios, as well as MU-MIMO and beamforming support for maximum throughput of up to a theoretical 2200 Mbps. 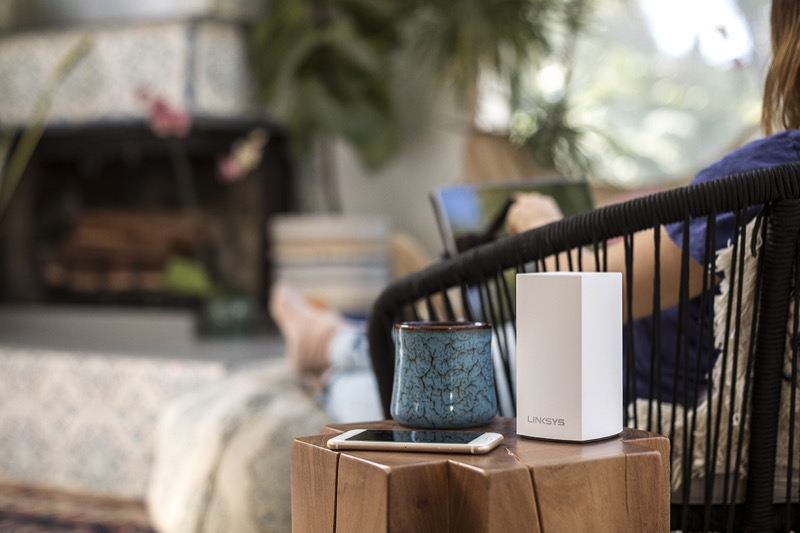 Competitively priced at $129 for a one-pack, $199 for a two-pack, or $299 for a three-pack, the new dual-band Velop system drops one of the 5 GHz radios, reducing theoretical throughput to 1300 Mbps. Range is also slightly less, with each node covering up to 1500 square feet for a maximum of 4500 square feet with the three-pack system. The dual-band Velop nodes also come in slightly smaller than the tri-band models, measuring about two inches shorter and the same 3.1 inches square in the base. 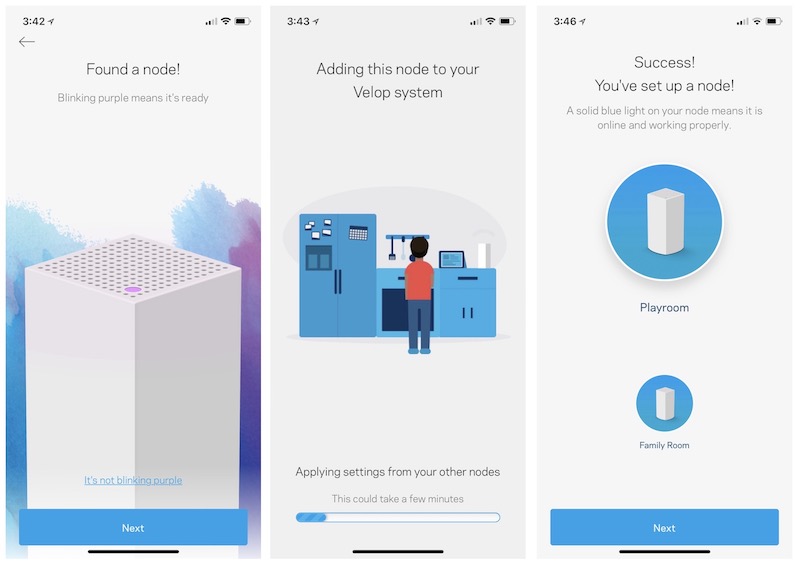 In my brief testing of the new dual-band Velop, I was definitely able to see the reduced coverage, as I did run into a couple of issues during the setup process where I was unable to add additional nodes due to various Wi-Fi connection issues. I eventually did get everything configured with blue status lights indicating solid Wi-Fi signals on all nodes.

Speeds were also not as fast through the dual-band system, as I consistently saw download and upload speeds around 30 Mbps from my office. It definitely appears to be an issue with pushing the range of the dual-band system despite the modest size of my home, as moving my devices closer to the primary node delivers fast speeds in excess of 90 Mbps. 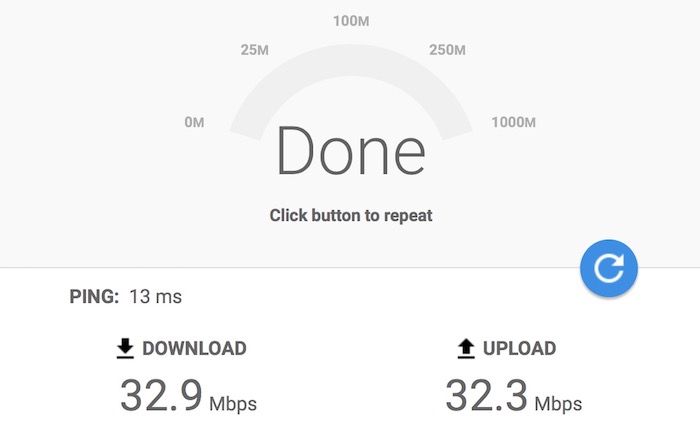 As with the tri-band model, all nodes in the dual-band Velop system are designed to work together to optimize coverage of your floor plan, making the most efficient use of bands and channels based on your usage habits. The network is also self-healing, with nodes able to reconnect to each other and the network if one of the nodes goes offline for some reason. 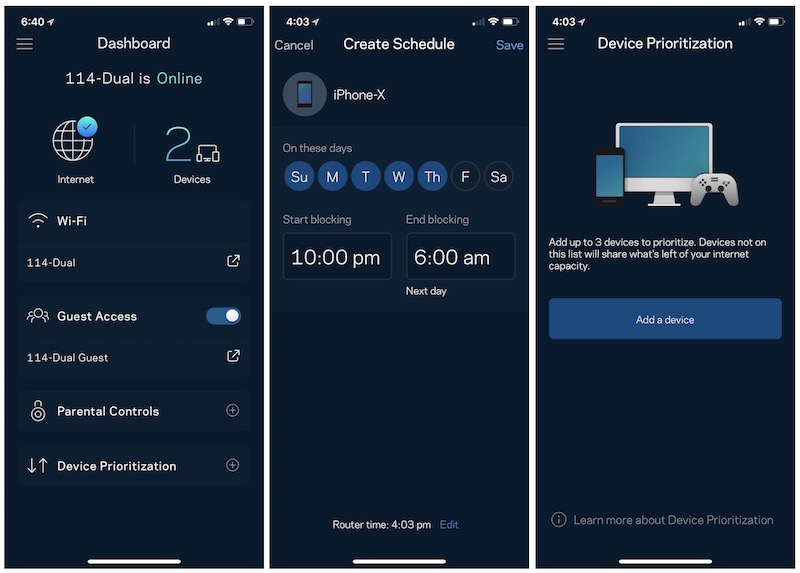 Each node has a pair of Ethernet ports that automatically configure themselves as one WAN and one LAN on the first node, and two LAN ports on other nodes. If you have a wired network in your home, Velop nodes can be connected via Ethernet for wired backhaul that leaves more of the wireless network available for general data transmission. 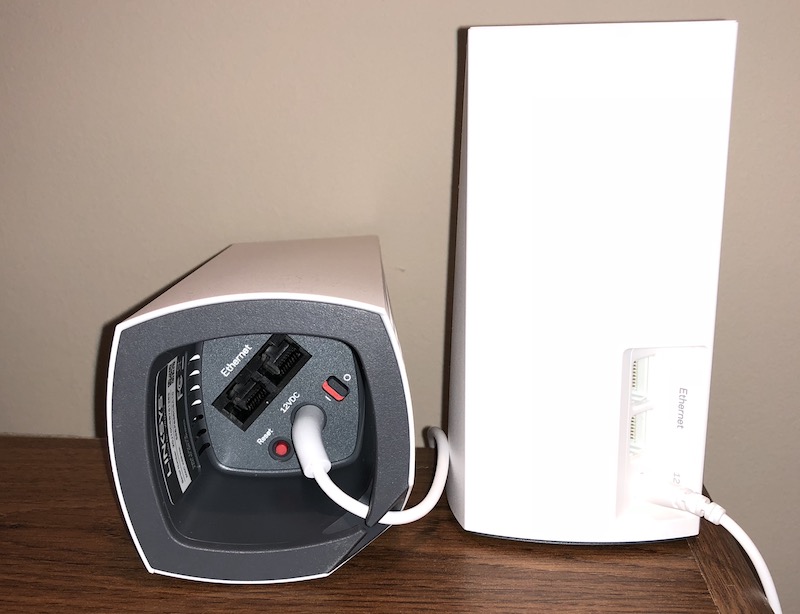 Ports on bottom of tri-band Velop (left) vs. rear of dual-band system (right)

Linksys certainly isn’t the only vendor in the mesh network game, with notable competitors like eero, AmpliFi, Netgear’s Orbi, and Google Wifi all proving popular. But with Linksys proving to be Apple’s partner of choice so far, the Velop systems undoubtedly have some advantages when it comes to visibility for Apple users. Pricing on the new dual-band Velop is also competitive, which will likely attract new potential customers who don’t need everything the tri-band system offers.

The dual-band Linksys Velop launches May 15 with pre-orders going up through Amazon today, and it will be available from a variety of retailers as of the launch date. Apple has not yet committed to selling the new dual-band system, but Linksys tells me discussions about carrying the dual-band Velop are ongoing.

The tri-band Velop system is available from a number of retailers such as Amazon in one-pack ($200), two-pack ($338), and three-pack ($450) options. The tri-band and dual-band Velop nodes are also interchangeable, so if you’ve already got some in the house you can mix and match types.

Note: Linksys provided the Velop systems to MacRumors free of charge for the purposes of this news coverage. No other compensation was received. MacRumors is an affiliate partner with Amazon and Linksys and may earn commissions on purchases made through links in this article.