Apple is set to report its earnings results for the second quarter of its 2018 fiscal year at 1:30 p.m. Pacific Time today.

Apple provided the following guidance for the quarter back on February 1:

Apple’s guidance suggests the company will report its best second quarter results ever, topping its previous record of $58 billion:

Wall Street analysts forecast that Apple will report $60.9 billion revenue, meeting roughly the midpoint of its guidance, and earnings per share of $2.69, according to over 30 estimates averaged by Yahoo Finance.

MacRumors has compiled second quarter revenue and EPS estimates from a handful of Apple-focused analysts: 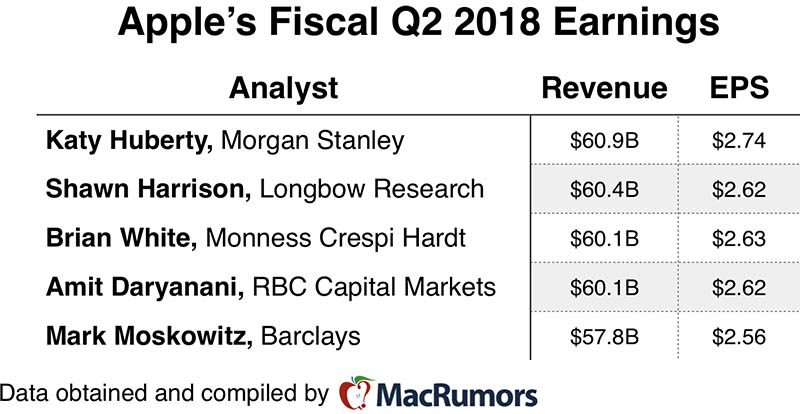 Key Takeaways and What to Look For

Apple’s CEO Tim Cook and CFO Luca Maestri will discuss the company’s earnings results on a conference call at 2:00 p.m. Pacific Time today. MacRumors will loosely transcribe the one-hour call as it happens.