From the Institute for Supply Management: April 2018 Non-Manufacturing ISM Report On Business®

Economic activity in the non-manufacturing sector grew in April for the 99th consecutive month, say the nation’s purchasing and supply executives in the latest Non-Manufacturing ISM® Report On Business®.

The report was issued today by Anthony Nieves, CPSM, C.P.M., A.P.P., CFPM, Chair of the Institute for Supply Management® (ISM®) Non-Manufacturing Business Survey Committee: “The NMI® registered 56.8 percent, which is 2 percentage points lower than the March reading of 58.8 percent. This represents continued growth in the non-manufacturing sector at a slower rate. The Non-Manufacturing Business Activity Index decreased to 59.1 percent, 1.5 percentage points lower than the March reading of 60.6 percent, reflecting growth for the 105th consecutive month, at a slower rate in April. The New Orders Index registered 60 percent, 0.5 percentage point higher than the reading of 59.5 percent in March. The Employment Index decreased 3 percentage points in April to 53.6 percent from the March reading of 56.6 percent. The Prices Index increased by 0.3 percentage point from the March reading of 61.5 percent to 61.8 percent, indicating that prices increased in April for the 26th consecutive month. According to the NMI®, all 18 non-manufacturing industries reported growth. There was a slowing in the rate of growth that was mostly attributed to the decline in the Employment and Supplier Deliveries indexes. The respondents have expressed concern regarding the uncertainty about tariffs and the effect on the cost of goods. Overall, the respondents remain positive about business conditions and the economy.”
emphasis added 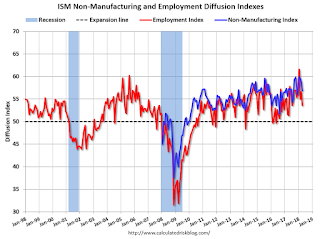 This suggests slower expansion in April than in March.