This gives a total of 4.36% delinquent or in foreclosure.

Today, the Data & Analytics division of Black Knight, Inc. released its latest Mortgage Monitor Report, based on data as of the end of March 2018. This month, leveraging data from the Black Knight Home Price Index, the company finds that 2018 home prices have seen the strongest gains to start any year since 2005. Home price growth has been widespread – 98 of the largest markets and 97 percent of 916 observed Core Based Statistical Areas (CBSAs) have all had annual increases, with the Western United States seeing some of the greatest gains. As Black Knight Data & Analytics Executive Vice President Ben Graboske explained, acceleration in the annual rate of home price appreciation at the national level continued through February, but that acceleration is not being seen in all markets.

“At the national level, home prices rose 1.24 percent since the start of 2018, with both January and February having their strongest respective single-month growth rates in 13 years,” said Graboske. “As of the end of February, home prices had risen 6.65 percent from a year ago, a metric that continues to increase. The rate of appreciation has accelerated by 42 basis points over the past six months and by 72 basis points over the past 12 months. This acceleration, combined with a nearly 40 basis point increase in the prevailing 30-year fixed interest rate during that same time frame, is creating a tighter affordability climate. We have now seen monthly increases in the national median home price for 27 of the past 28 months, and annual gains for 70 consecutive months.

“While almost all markets are seeing home prices rise, rates of appreciation vary across the country with the highest being seen in Western states. In fact, of the 11 markets with price gains of 10 percent or more, all 11 are in the Western United States. Across the country, we see an approximately 60-40 split in the number of markets experiencing home price appreciation vs. those with some degree of deceleration. By far, the heaviest areas of acceleration are San Jose and Las Vegas. The former has seen the rate of appreciation increase by 18 percent from just under six percent at the start of 2017 to a 24.1 percent annual rise in home prices as of February. The median home price in San Jose now stands at $1.17 million – the highest of any metro – an increase of $226,000 from just one year ago. To put that in perspective, more than half of the nation’s 100 largest markets have median home prices below this $226,000 annual growth in San Jose’s median home price. In Las Vegas, which has now surpassed Seattle as the second fastest-appreciating market nationwide, home prices are up nearly 15 percent from last year. Even so, Las Vegas home prices remain 22 percent below their pre-recession peak.”

The month’s data also showed the continued impact of rising mortgage interest rates on the population of borrowers who could both likely qualify for and gain a rate benefit from refinancing. There are now nearly 2 million fewer refinance candidates than there were entering 2018, a 46 percent decline. The total number of refinance candidates now stands at 2.3 million, the fewest since November 2008, when interest rates were above 6.0 percent. Additionally, the incentive for borrowers to refinance in order to lower their interest rates is all but non-existent among mortgages originated in the past five years. Of the nearly 28 million borrowers with 30-year mortgages originated in 2012 or later, fewer than 45,000 have 75 basis points of interest rate incentive to refinance while also meeting broad-based eligibility requirements.
emphasis added 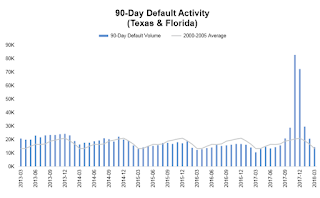 This graph from Black Knight shows the 90 default activity in the hurricane impacted states.

• Prior to the 2017 hurricanes, Texas and Florida accounted for approximately 15% of all default activity for the last 5+ years

• The post-hurricane surge in defaults drove that share as high as 50% in November 2017; it has since subsided to roughly one in five defaults coming from the two states

• Default activity remained elevated in January and February as well, with 65K defaults in Q1 2018 as a whole 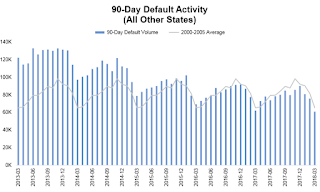 • In non-hurricane-affected areas, default volumes haven now fallen below these longterm benchmarks in each of the past 10 months

• This improvement is largely due to favorable macroeconomic trends, improved performance from seasoned mortgages and the overarching pristine quality of post-recession vintages

• However, in non-hurricane affected states defaults were down by 5% year-over-year for the lowest 12-month total since 2004/2005