The headline jobs number at 164,000 for April was below consensus expectations of 190 thousand, however the previously two months were revised up a combined 30 thousand. With the revisions, this was close to expectations.

In April, the year-over-year employment change was 2.280 million jobs. This has been generally trending down, but is still solid year-over-year growth.

Wage growth was about as expected in April, however hourly wages for March were revised down. From the BLS: 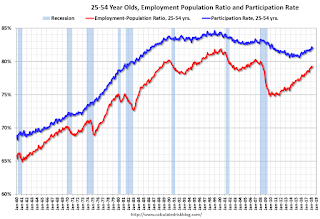 This graph is based on “Average Hourly Earnings” from the Current Employment Statistics (CES) (aka “Establishment”) monthly employment report. Note: There are also two quarterly sources for earnings data: 1) “Hourly Compensation,” from the BLS’s Productivity and Costs; and 2) the Employment Cost Index which includes wage/salary and benefit compensation.

The graph shows the nominal year-over-year change in “Average Hourly Earnings” for all private employees.  Nominal wage growth was at 2.6% YoY in April.

Wage growth had been trending up, although growth has been moving sideways recently. 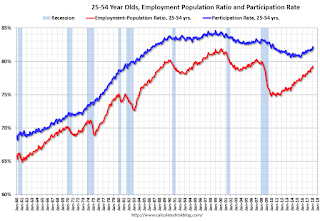 Since the overall participation rate has declined due to cyclical (recession) and demographic (aging population, younger people staying in school) reasons, here is the employment-population ratio for the key working age group: 25 to 54 years old. 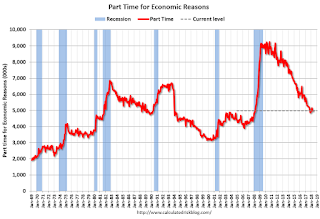 From the BLS report:

“The number of persons employed part time for economic reasons (sometimes referred to as involuntary part-time workers) was essentially unchanged at 5.0 million in April. These individuals, who would have preferred full-time employment, were working part time because their hours had been reduced or because they were unable to find full-time jobs.“

These workers are included in the alternate measure of labor underutilization (U-6) that decreased to 7.8% in April. This is the lowest level for U-6 since 2001. 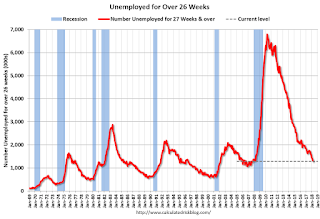 This graph shows the number of workers unemployed for 27 weeks or more.

According to the BLS, there are 1.293 million workers who have been unemployed for more than 26 weeks and still want a job. This was down from 1.322 million in March.

This is the lowest level since September 2007.

This is trending down, but remains a little elevated.

The headline jobs number was a little disappointing, however the previous two months were revised up.  For the first four months of 2018, job growth has been solid averaging close to 200 thousand per month.