Fortnite on iOS Has Earned $50M Since Launch

Popular battle royale game Fortnite has eared more than $50 million in revenue since its March 15 launch, according to new data shared this afternoon by app analytics firm Sensor Tower.

Fortnite is free to download, but it encourages players to shell out cash within the app for “V-Bucks” that can be used to purchase customization items like emotes, outfits, gliders, and more. The minimum in-app purchase is $9.99 for 1,000 V-Bucks, but players can spend more if desired. Players are also able to earn V-Bucks in game, but at a slow rate.

On iOS devices, Fortnite has proven to be incredibly popular. While it was still in beta, Fortnite had earned more than $1.5 million, and during its first month of availability on iPads and iPhones, the game brought in $25 million. It only took two weeks for that to double to $50 million.

Fortnite continues to be the number two top free game on the iOS App Store, with Epic Games managing to keep players engaged through different seasons that introduce new challenges to complete and content to unlock. Players can also purchase Battle Passes for $10 worth of in-game currency to receive additional items for completing season content.

Fortnite’s fourth season content, which debuted earlier this week, is what pushed it over the $50 million mark. Player spending in the game jumped up 293 percent on May 1 when the content launched, a 4x increase compared to the preceding Tuesday. 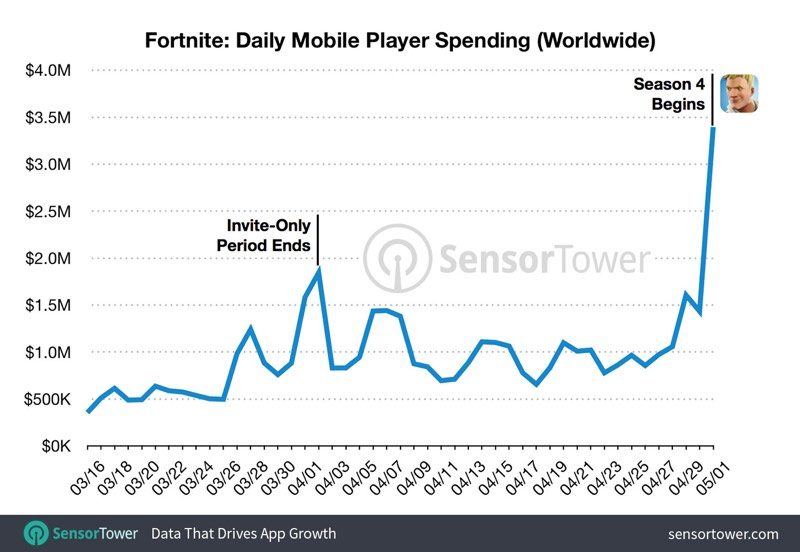 Sensor Tower says that Fortnite’s strategy of selling limited-time skins and other items has resulted in players spending approximately $1 million per day in the mobile game alone. 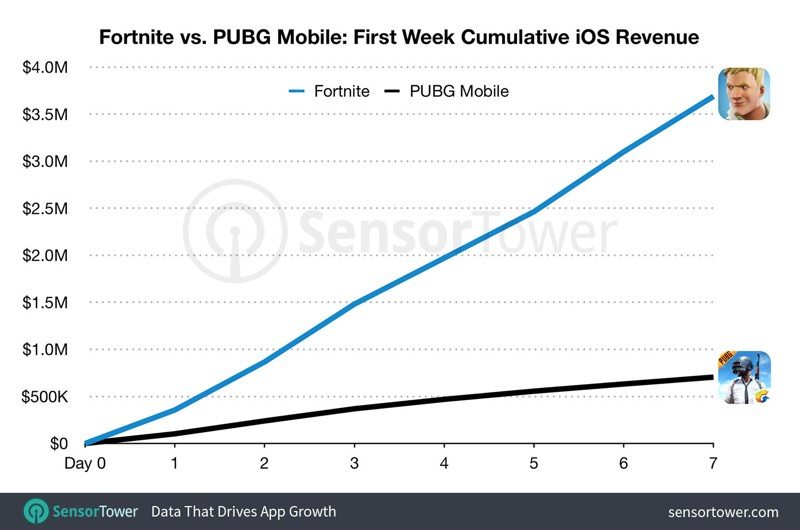 PUBG, another battle royale game that launched shortly after Fortnite, has not been as successful, which Sensor Tower attributes in part to its loot box monetization strategy. While Fortnite offers unique items available for a limited amount of time, PUGB only allows players to purchase randomized boxes that can result in duplicate and non-useful items.