Balancing the Free-Speech Rights of Employees and Employers

Everywhere you turn in 2018, people are talking about politics. That includes your workplace. Since President Donald Trump’s election in November 2016, it seems like you can’t escape the constant drumbeat of other people’s political messages. With so much political talk in the air, what can an employer do to ensure that its employees’ speech is appropriate without violating their rights? 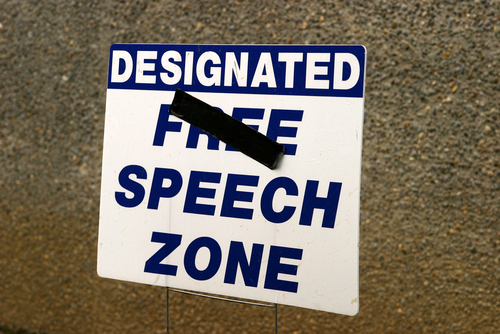 I wrote about this issue in the February 2017 Iowa Employment Law Letter, after a New Mexico businessman turned away his Republican clients. Since that time, there have been several other prominent examples of alleged political discrimination, including a recent case in Iowa.

The director of policy and legal services for the Iowa Association of School Boards (IASB) was let go for blurring the lines between her private speech and the speech of the IASB.

The IASB is a private nonprofit in Des Moines that represents school boards at the Statehouse and in court on issues of education policy and school funding. It’s a nonpartisan group and likes to keep it that way.

But when the employee—who is also an elected Waukee city councilwoman and candidate for the Iowa House of Representatives—wrote an opinion piece in the Des Moines Register defending Governor Kim Reynolds and Republicans in the legislature, the IASB dismissed her. It apparently took issue with her identifying herself in the editorial as “an attorney with the Iowa Association of School Boards,” among other biographical information.

The IASB defended firing the employee by saying her article conflicted with its “need to work in an absolutely nonpartisan manner.” But in a lawsuit filed in February, she says the IASB doesn’t enforce its policy against public partisan statements, citing Facebook posts by IASB employees.

A business certainly has an interest in maintaining the appearance of nonpartisanship. It’s not far-fetched to imagine customers cutting ties with a business over its apparent political stances. This is especially important for government entities or businesses that maintain government contracts. But the boundaries of where your company’s public image and your employees’ private lives (and right to speech, if you are the government) start and stop can be unclear.

Under Iowa law, you cannot fire an employee for engaging in an activity that is clearly defined and well-recognized as protected unless you have an overriding business justification. Even then, if she can show that your business justification is just pretext (a false excuse) for an illegal termination, you could be liable.

Political speech and participation—such as attending a candidate’s event, donating to a political campaign, or even running for office—are likely to be protected activities. Although public employers face different challenges when it comes to restricting their employees’ private speech, these rules apply to private employers, too. Even if your company is a private-sector employer, it’s important to make sure you are protecting yourself.

A private business has free-speech rights, too, just like its employees. That includes the right to control its own message and to ensure that the messages coming from the business are authorized and that employees’ private speech isn’t mistaken for the speech of the company.

As a private employer, how should you protect yourself when you don’t endorse an employee’s message?

While these policies protect your company’s reputation, none of them would intrude on your employees’ rights to express themselves as private citizens.

Enforce the policies. The next step is to enforce your policies universally. It’s important that a policy against using your company’s name in op-eds or press statements isn’t used to punish speech a supervisor disagrees with, but rather is used for its stated purpose—ensuring the nonpartisan operation of your business. Selective enforcement of a policy like this is begging for a lawsuit like the one filed against the IASB.

Whether the IASB was justified in firing the employee will be for a jury to decide. But a few simple changes in your policies and procedures and consistent enforcement could save your company a huge headache in 2018.

Luke Draisey, contributor to Iowa Employment Law Letter, can be reached at lukedraisey@davisbrownlaw.

The post Balancing the Free-Speech Rights of Employees and Employers appeared first on HR Daily Advisor.