Negotiation Tip of the Week

“The truth is the opposite of a lie that’s believable. Watch what you believe!” -Greg Williams, The Master Negotiator & Body Language Expert 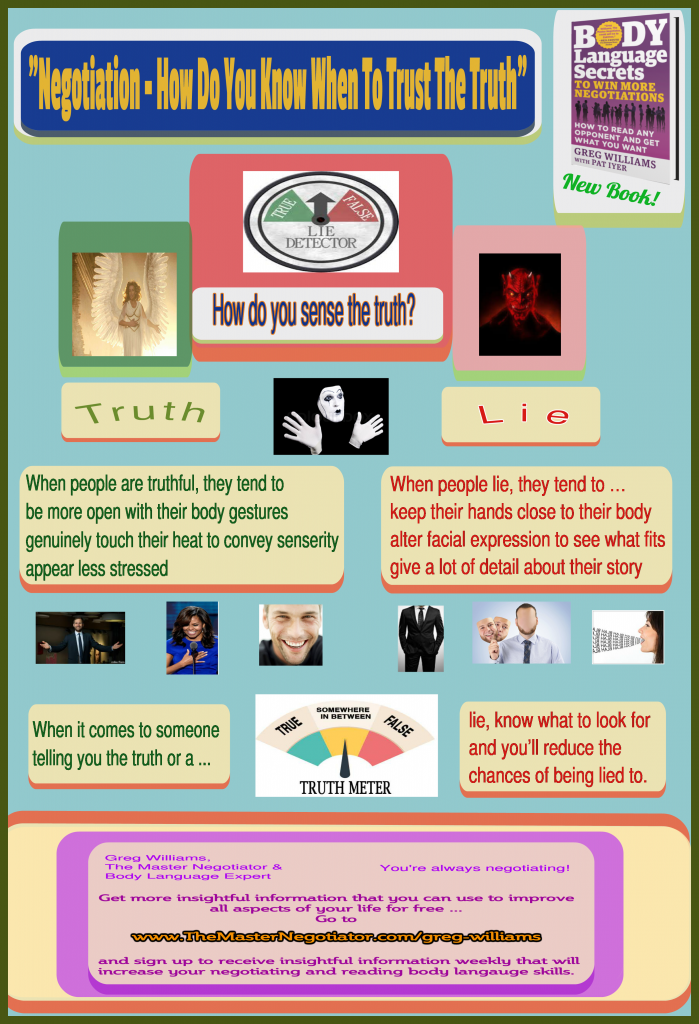 “Negotiation – How Do You Know When To Trust The Truth”

“You don’t know what the truth looks like, even though I’ve recited it numerous times to you through my ever-changing story.”

What does the truth feel like, sound like, look like, when you feel it, hear it, see it? How do you determine to what degree the truth has been told? The truth can be fluid. That means, we know what the truth is today, based on what we’ve known to be truthful in the past. Then, as greater insight, discoveries, and other machinations are introduced into our environment, a new truth can emerge.

It’s important to understand how you discern what you perceive to be the truth because others can manipulate you, based on what they know of your ability to distinguish between fact from fiction.

To become more cognizant as to when someone might be engaging in the truth, versus having no relationship with it at all, take note of the following insights.

Demeanor – Yours and Theirs

Always note the demeanor of someone when they engage with you. In particular, note to what degree they feel at ease, uptight, or normal (whatever that is as it relates to their demeanor); you can observe this by noting how they act/respond in unstressful environments. The non-stressful environment will become the basis from which to make and compare future assessments. You should also be mindful of how you feel as the result of being with the person that’s speaking to you. Your demeanor will put you into a particular mindset that sets your perception and expectations about that person’s ability to tell the truth.

When it comes to truthfulness versus deception, you know more than you think you do. When was the last time you had a ‘feeling’ about whether someone was telling you the truth? What did you experience? Was it something they said, the way they said it, or maybe the way they looked when they said/did it. When you had that sensation, your intuitiveness had kicked in; something triggered it. If you were aware through which senses you perceived such signals, you can use the same sense(s) to heighten your awareness in the future. Never discount a gut feeling. That’s your subconscious mind beckoning your attention.

When people lie, they tend to fill their story with detail and they’ll attempt to tell their story in a chronological order. To catch such a perpetrator, take one aspect of his story and slightly change it as you recite it back to him; don’t let on that you’re doing so to see if he corrects you, or agrees to your version of his story. If he doesn’t correct you, do the same with another section of his story to see what he does. If he lets that one go too, feign forgetfulness and ask him to repeat the story. Note to what degree the story changes from the original version. To the degree that it does, you’ll know where the lie lies.

When someone is being truthful, their body language is aligned with their words (i.e. hand and eye movements are synched with words). If you note subtle changes in their demeanor, as they profess to tell you the truth, note the question you posed that caused such a reaction. The question you posed, and their reaction to it, will be a guidepost that indicates the degree that you may be uncovering their lack of truthfulness.

There are many reasons why someone may wish to avoid being 100% truthful with you. If you set the ‘right’ environment, observe the storyteller’s body language, and you’re mindful of this person’s demeanor you’ll create the space in which more of the truth can reside … and everything will be right with the world.

The post “Negotiation – How Do You Know When To Trust The Truth” – Negotiation Tip of the Week appeared first on The Master Negotiator & Body Language Expert.