The Small Business Optimism Index sustained record-high levels increasing to 104.8 in April, driven by reports of improved profits, the highest in the NFIB Small Business Economic Trends Survey’s 45-year history. Additionally, the number of small businesses reporting poor sales fell to a near record low.
..
Reports of employment gains remain strong among small businesses … Owners reported adding a net 0.28 workers per firm on average, the third highest reading since 2006 (down from 0.36 workers reported last month, the highest since 2006). …

Fifty-seven percent reported hiring or trying to hire (up 4 points), but 50 percent (88 percent of those hiring or trying to hire) reported few or no qualified applicants for the positions they were trying to fill. Twenty-two percent of owners cited the difficulty of finding qualified workers as their Single Most Important Business Problem (up 1 point), exceeding the percentage citing taxes or regulations.
emphasis added 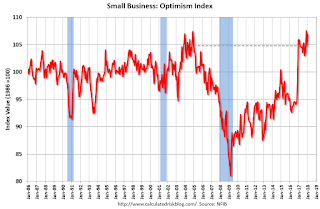 This graph shows the small business optimism index since 1986.

Note: Usually small business owners complain about taxes and regulations.  However, during the recession, “poor sales” was the top problem.

Now the difficulty of finding qualified workers is the top problem.