“The Danger In The ‘Us Versus Them’ Dilemma” – Sunday Negotiation Insight

“When it comes to an ‘us versus them’ mentality, potential danger looms in the inability to understand ‘them’.” -Greg Williams, The Master Negotiator & Body Language Expert 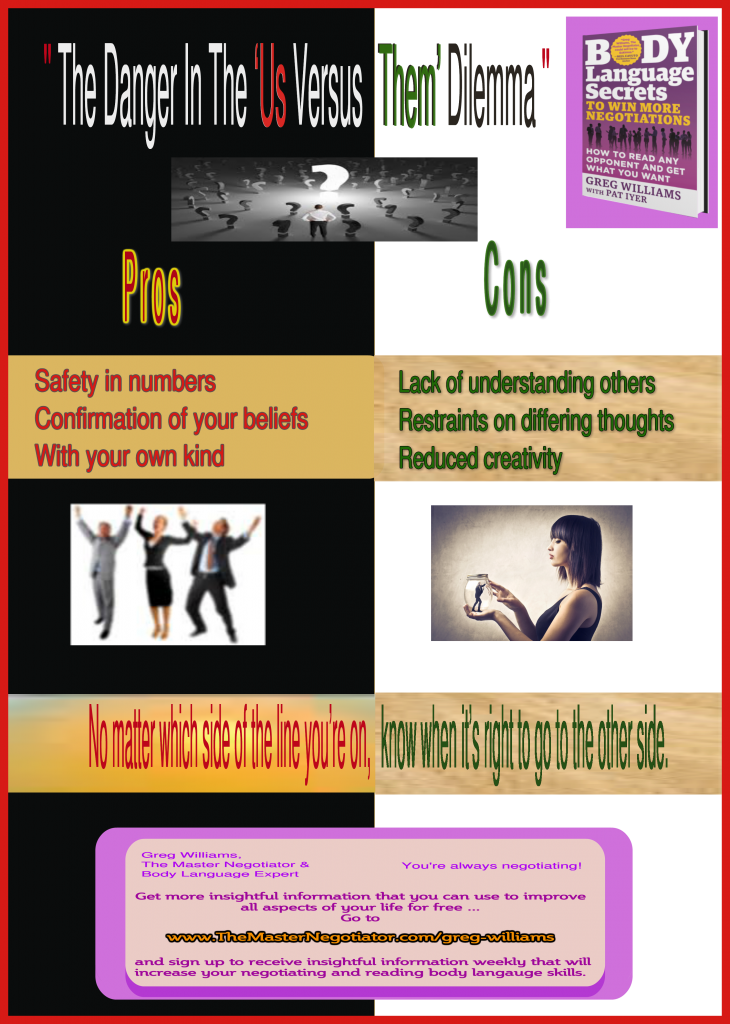 “The Danger In The ‘Us Versus Them’ Dilemma”

“If we stick together, we can overcome them.” Those were the words of a devoted follower of his group. That is, he was a follower until he realized that he did not want to follow the group in the direction it was going.

There’s danger in the ‘us versus them’ mindset; it’s a dilemma people don’t realize when they’re in it. So, what is that danger and why should you be mindful of its pitfalls?

Psychologically, everyone needs to belong to an entity that’s larger than themselves. That’s not the dangerous part of the dilemma; the danger lies in the degree that you’re willing to follow the group, based on your own beliefs, and the confliction that might be caused as the result of those two being out of sync with one another. It also highlights what can occur, per how you view what the group terms as enemies of its norms. You hear that in the intonation of, “they’re not like us.” Therefore, something must be wrong with them.

If one adopts the latter mindset, their mind becomes clouded by the prominent thought that someone that doesn’t share the same norms as the group that they belong to, must be ‘missing the boat’ (i.e. not seeing something right). Once such a mindset is adopted, you’ll seek confirmation in the actions of those that are unlike your group, to confirm why you can’t treat them like you treat members of your group. In essence, your mind will have been jaded to receiving positive thoughts and ideas that might otherwise allow you to see ‘the others’ in a positive light.

If you want to be more open-minded, do so by believing, and allowing your thoughts to be moved by, the thinking that people may have different opinions and perspectives about something, but because they do, that doesn’t make them wrong or a bad person.

When it comes to ‘us versus them’, keep an open mind with the intent to discover something new about the perspective being discussed. Doing so will allow you to gain more insight into anything that you weigh. That will make you a more informed individual … and everything will be right with the world.

In a negotiation, you should always be mindful as to how you’re being influenced by the biases you have, towards the person making the proposal or offer. Even if you don’t like the initial offer, don’t let your initial emotions alter its appearance. There may be more than meets the eye, if you keep an open mind and consider any hidden benefits the offer might contain.

Good negotiators are aware that they can control a negotiation better, by controlling themselves. When it comes to, ‘us versus them’ in a negotiation, such a demeanor will only serve as a blight on an otherwise more successful negotiation outcome.

What are your thoughts? I’d really like to know. Reach me at Greg@TheMasterNegotiator.com

The post “The Danger In The ‘Us Versus Them’ Dilemma” – Sunday Negotiation Insight appeared first on The Master Negotiator & Body Language Expert.