The Projected Improvement in Life Expectancy

Here is something different, but it is important when looking at demographics …

The following data is from the CDC United States Life Tables, 2014 by Elizabeth Arias. 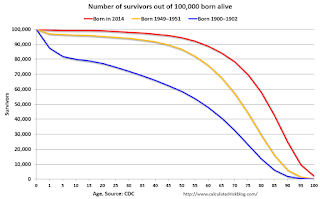 There was a dramatic change between those born in 1900 (blue) and those born mid-century (orange). The risk of infant and early childhood deaths dropped sharply, and the risk of death in the prime working years also declined significantly.

The CDC is projecting further improvement for childhood and prime working age for those born in 2014, but they are also projecting that people will live longer. Also the number of deaths for those younger than 20 will be very small (down to mostly accidents, guns, and drugs).  Self-driving cars might reduce the accident components of young deaths.

Some people look at this data and worry about supporting all these old people.  To me, this is all great news – the vast majority of people can look forward to a long life – with fewer people dying in childhood or during their prime working years.