Trends in Educational Attainment in the U.S. Labor Force

The first graph shows the unemployment rate by four levels of education (all groups are 25 years and older) through April 2018.

Unfortunately this data only goes back to 1992 and includes only two recessions (the stock / tech bust in 2001, and the housing bust/financial crisis). Clearly education matters with regards to the unemployment rate – and all four groups are generally trending down. 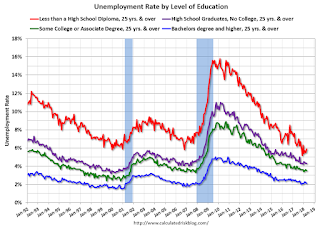 Note: This says nothing about the quality of jobs – as an example, a college graduate working at minimum wage would be considered “employed”.

This brings up an interesting question: What is the composition of the labor force by educational attainment, and how has that been changing over time?

Note: Thanks to Tim Duy, Economics Professor at the University of Oregon, and Josh Lehner, at the Oregon Office of Economic Analysis.

Here is some data on the U.S. labor force by educational attainment since 1992. 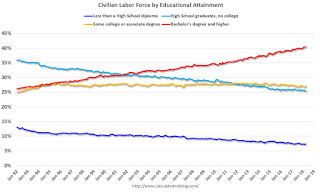 This is the only category trending up.  “Some college” has been steady, and both “high school” and “less than high school” have been trending down.

Based on current trends, probably more than half the labor force will have at least a bachelor’s degree sometime in the next decade (2020s).

Also, I’d guess more education would mean less labor turnover, and that education is a factor in fewer weekly claims (I haven’t seen data on unemployment claims by education).

A more educated labor force is one of the reasons I remain optimistic about the future.