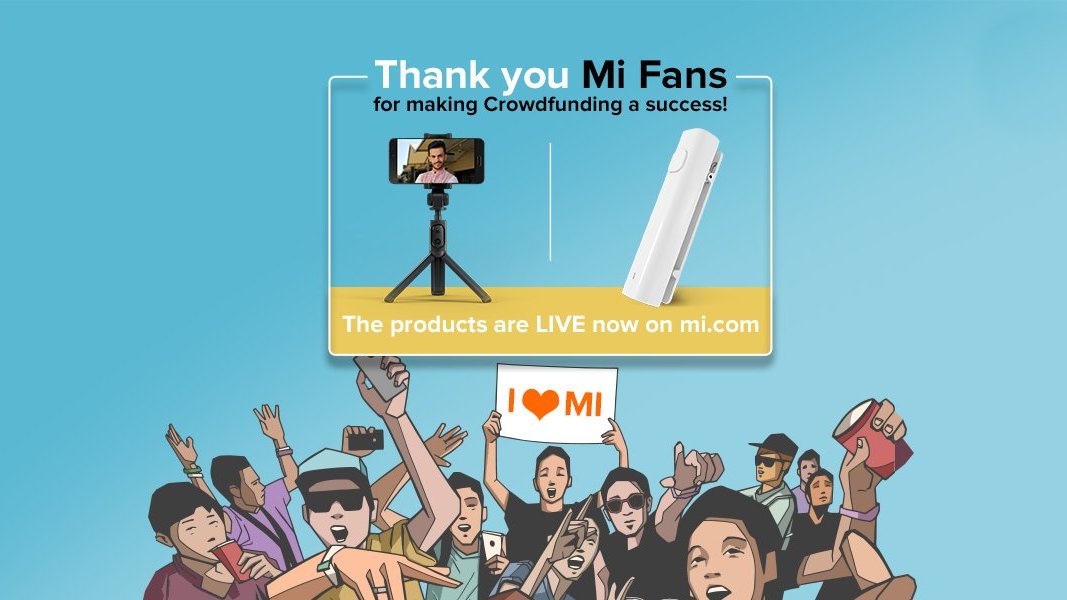 Xiaomi had launched the Mi crowdfunding service in India in April and at that time, the company had listed two products for crowdfunding – the Mi Selfie Stick Tripod and the Mi Bluetooth Audio Receiver. Both the products have successfully passed the crowdfunding stage and are now available for purchase in the country.

When Xiaomi launched the Mi Crowdfunding service, the company had said that if a product listed for crowdfunding receives 100% support within the mentioned time period, the product will be shipped to the initial backers and then be launched for other users also. The company said that this service will help Xiaomi decide which products it should launch in India.

The Xiaomi Mi Selfie Stick Tripod is a tripod stand and selfie stick combined into one that comes with a Bluetooth shutter remote. The device can be used both as a selfie stick and tripod. It features a 360-degree rotating phone mount which can hold devices with width ranging between 56mm and 89mm including Xiaomi’s biggest device, the Mi Max 2 that has a width of 88.3mm.

The Xiaomi Mi Selfie Stick Tripod is made from a strong aluminum alloy and the stick can be expanded when using it for selfies. The device supports Bluetooth 3.0 and is compatible with devices running on Android 4.3 and higher and iOS 5.0 and higher. It is priced at Rs. 1,099 and available from mi.com and Mi Retail stores.

The Mi Bluetooth Audio Receiver is the second device that has been listed by Xiaomi after successful crowdfunding. It lets you connect two devices at once and has one key that can be used to connect to Bluetooth, control music playback and answer calls.

It has a built-in professional AMP chip and is powered by a 97mAh battery that can provide up to 5 hours of audio playback. It is priced at Rs. 999 and available from mi.com and Mi Retail stores.

The company in a tweet said, “Mi fans! The Mi Crowdfunding was a great success. Thank you for all your love & support! The products are live.”