Industrial production rose 0.7 percent in April for its third consecutive monthly increase. The rates of change for industrial production for previous months were revised downward, on net; for the first quarter, output is now reported to have advanced 2.3 percent at an annual rate. After being unchanged in March, manufacturing output rose 0.5 percent in April. The indexes for mining and utilities moved up 1.1 percent and 1.9 percent, respectively. At 107.3 percent of its 2012 average, total industrial production in April was 3.5 percent higher than it was a year earlier. Capacity utilization for the industrial sector climbed 0.4 percentage point in April to 78.0 percent, a rate that is 1.8 percentage points below its long-run (1972–2017) average.
emphasis added 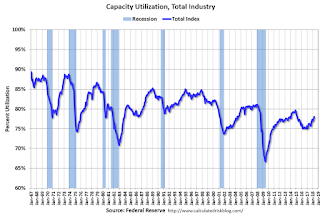 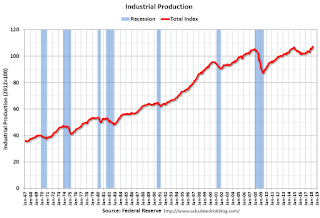 Industrial production increased in April to 107.3. This is 23% above the recession low, and 2% above the pre-recession peak.