The Federal Reserve Bank of New York’s Center for Microeconomic Data today issued its Quarterly Report on Household Debt and Credit, which shows that total household debt increased by $63 billion (0.5%) to $13.21 trillion in the first quarter of 2018. It was the 15th consecutive quarter with an increase, and the total is now $536 billion higher than the previous peak of $12.68 trillion, from the third quarter of 2008. Further, overall household debt is now 18.5% above the post-financial-crisis trough reached during the second quarter of 2013. The Report is based on data from the New York Fed’s Consumer Credit Panel, a nationally representative sample of individual- and household-level debt and credit records drawn from anonymized Equifax credit data.

Mortgage balances—the largest component of household debt—rose by $57 billion during the first quarter, to $8.94 trillion. Balances on home equity lines of credit (HELOC) continued their downward trend, declining by $8 billion, to $436 billion. The median credit score of newly originating mortgage borrowers increased from 755 to 761.

“While housing wealth is at an all-time high, it has shifted into the hands of older and more creditworthy borrowers, in part because of tight mortgage lending standards,” said Andrew Haughwout, senior vice president at the New York Fed. “An increased amount of available home equity should make the household balance sheet more resilient in the event of a financial shock, though that may not be an option for lower-credit-score borrowers.”
emphasis added 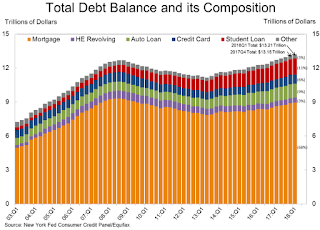 Here are two graphs from the report:

From the NY Fed:

Mortgage balances, the largest component of household debt, increased somewhat during the first quarter. Mortgage balances shown on consumer credit reports on March 31 stood at $8.94 trillion, an increase of $57 billion from the fourth quarter of 2017. Balances on home equity lines of credit (HELOC) continued their downward trend, declining by $8 billion, and are now at $436 billion. Non-housing balances saw a $14 billion increase in the first quarter. Auto loans grew by $8 billion. Student loan balances increased by $29 billion and credit cards declined by $19 billion. 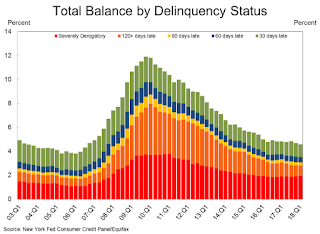 The overall delinquency rate decreased in Q1.  From the NY Fed:

About 192,000 consumers had a bankruptcy notation added to their credit reports in 2018Q1, the lowest observed in the 19 year history of the data.

There is much more in the report.