Network Selling is a sales model we created several years ago, that expresses the ideal needed in today’s interconnected digital sales landscape. It is expressed in the graphic below: 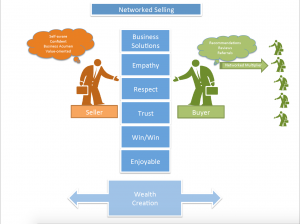 In this blog series, we will be going through each of the factors in Network Selling, fully explaining each. But it should be expressed now that the Network Selling model isn’t just for sales—it actually has application in every human interaction.

A common term in sales today is EQ, which stands for “emotional I.Q.” This means the ability of a salesperson to read emotions, and utilizing this emotional understanding in when making a sale. It includes empathy and a number of other abilities. Basically, EQ is an I.Q. that measures someones ability to read emotions.

But, just as with our Network Selling model, E.Q. isn’t just for sales, either. It’s actually the missing factor in human interactions. Confrontation, which is a commonly used “tool” in human interactions, doesn’t actually handle anything. It involves no empathy, no understanding, and negatively impacts a relationship.

The Sales Process at Play

Anyone who has ever spent time in Turkey or the Middle East probably loves going to the common market there, also called a bazaar. Every deal results in an established relationship: you’re buying, the seller is overselling, and then you start negotiating. You feel the price is too high, but the seller says, “No, it’s too cheap!” In the end, you both agree on a price, and the seller then invites you to sit down for a hot tea or coffee. You then sit together (in the old days people sat mostly on the floor), and then celebrate a mutually beneficial deal. You become friends! There are many stories, and even movies about this type of occurrence.

So what is that we demonstrate there in the bazaar? It’s a network! We’ve come to define “network” in the 21st century as networking communities, networking events, networking parties, learning to network better, and going to places to shake hands with the perfect 60-second pitch poised on our lips. Forget that! Real networking is real life. It’s authenticity. It’s a real relationship—still the best network of all time!

Real Networking is About YOU

You network based on who you really are, and your interest in other people. Although they’re certainly far above the level of cattle, human beings factually live in herds. We need each other. In real life, where does such networking start? In the family. Children learn to interact, that is, to network, in their family. If they don’t learn it there, where else will it happen? In a familial setting, you have a real network: 2 parents, children, a grandmother and grandfather on both sides, and then aunts, uncles, cousins, nieces and nephews. All of that adds up to a community, and one learns to network within it—to speak, to engage.

The post The Network Selling Model appeared first on SalesPOP!.