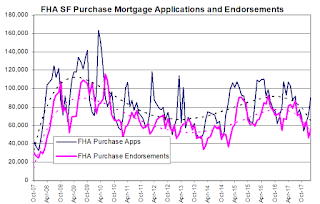 CR Note: These three graphs are from Tom Lawler.

The first graph shows FHA single family purchase and applications and endorsements. FHA volumes are down recently (and according to the MBA, the FHA receives about 10% of all mortgage applications). 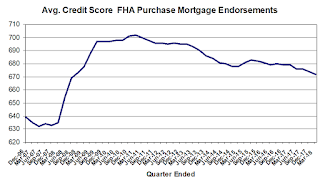 Lending standards were tightened after the housing bubble, but have been slowly slipping.

As Lawler noted “The average credit score of FHA purchase mortgage endorsements last quarter was 672, the lowest quarter average since 2008.” 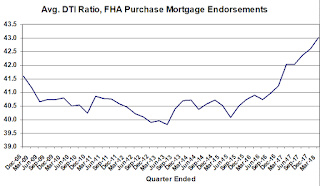 The third graph shows the average debt-to-income (DTI) ratio for borrowers who receive an FHA endorsement.

The average ratio has increased significantly over the last couple of years.

Looser standards (lower credit scores, higher DRI) means more risk. This isn’t too concerning; it is only 10% of the mortgage markets. However further declines in the average credit score – and / or increases in the DTI – would be a little worrisome.