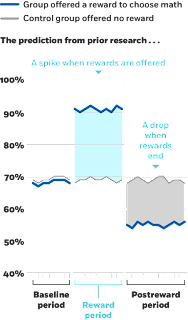 For many years, the conventional wisdom has been that offering temporary incentives reduces intrinsic motivation. University of Chicago Professor Oleg Urminsky summarizes the view held by many scholars and practitioners in the fields of business and education:
The view that a temporary incentive could undermine intrinsic motivation has had a major impact on policy, particularly in relation to children and education. The author and lecturer Alfie Kohn has published several books on the topic, including one called Punished by Rewards: The Trouble with Gold Stars, Incentive Plans, A’s, Praise, and Other Bribes. Appearing on the Oprah Winfrey Show in 1996, he explained why he saw rewarding kids as a bad idea: “One of the findings in psychology that has been shown over and over again [is that] the more you reward people for doing something, the more they tend to lose interest in whatever they had to do to get the reward.”   He went on to talk about grades as problematic incentives, and he went further in his book, writing that verbal praise is coercive and should be avoided because it contains an implied threat to withhold praise in the future. 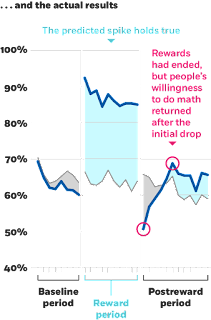 Urminsky describes new research conducted by University of Buffalo’s Indranil Goswami.  He points out that Goswami doesn’t just measure what happens immediately after an incentive disappears.  Instead, he tracks the effects of incentives over time.   What did Goswami find?  Indeed, intrinsic motivation appears to drop when a temporary incentive is removed. However, that drop is extremely short-lived. After a short period, motivation returns to the pre-existing level, and in fact, it increases rather quickly to a point slightly higher than the original level. The charts shown here demonstrate the prediction from prior research vs. the new findings. Urminksy concludes, “The results are inconsistent with the dire warnings about incentives. Providing a temporary incentive can yield a boost in behavior while people are being paid, and only a small and brief decline afterward. Maybe incentives work pretty well after all.”  He calls for more research given these interesting findings that challenge our conventional wisdom.  I agree.  We certainly need to learn more before we simply adhere to the pre-existing beliefs that incentives absolutely reduce intrinsic motivation.