The FDIC released the Quarterly Banking Profile for Q1 today:

Aggregate net income for the 5,606 FDIC-insured commercial banks and savings institutions reporting first quarter performance totaled $56 billion in first quarter 2018, an increase of $12.1 billion (27.5 percent) from a year earlier. Improvement in net income was attributable to higher net operating revenue (the sum of net interest income and noninterest income) and a lower effective tax rate, but was offset in part by higher loan-loss provisions and noninterest expense.
…
The Deposit Insurance Fund (DIF) balance increased by $2.3 billion, to $95.1 billion, during the first quarter. … No banks failed during the quarter. … The DIF’s reserve ratio (the fund balance as a percent of estimated insured deposits) was 1.30 percent on March 31, 2018, unchanged from year-end 2017 due primarily to strong first quarter growth in estimated insured deposits. The reserve ratio increased by ten basis points from one year earlier.
emphasis added 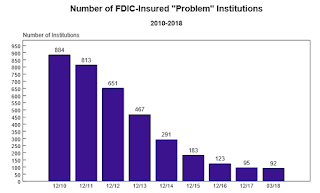 The FDIC reported the number of problem banks declined slightly.

This graph from the FDIC shows the number of problem banks declined to 92 institutions from 95 at the end of 2017.

Note: The number of assets for problem banks increased significantly, suggesting a fairly large bank was added to the list (more on this when we update the unofficial list at the end of the month). 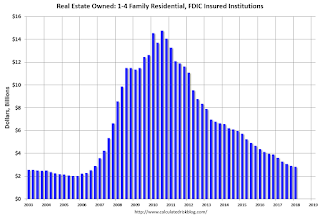 This graph shows the nominal dollar value of Residential REO for FDIC insured institutions. Note: The FDIC reports the dollar value and not the total number of REOs.

Since REOs are reported in dollars, and house prices have increased, it is unlikely FDIC institution REOs will get back to the $2.0 to $2.5 billion range back that happened in 2003 to 2005.    FDIC REOs will probably bottom close to the current level.