“No matter how difficult your current times are, one day, they will become the good old days.” -Greg Williams, The Master Negotiator & Body Language Expert 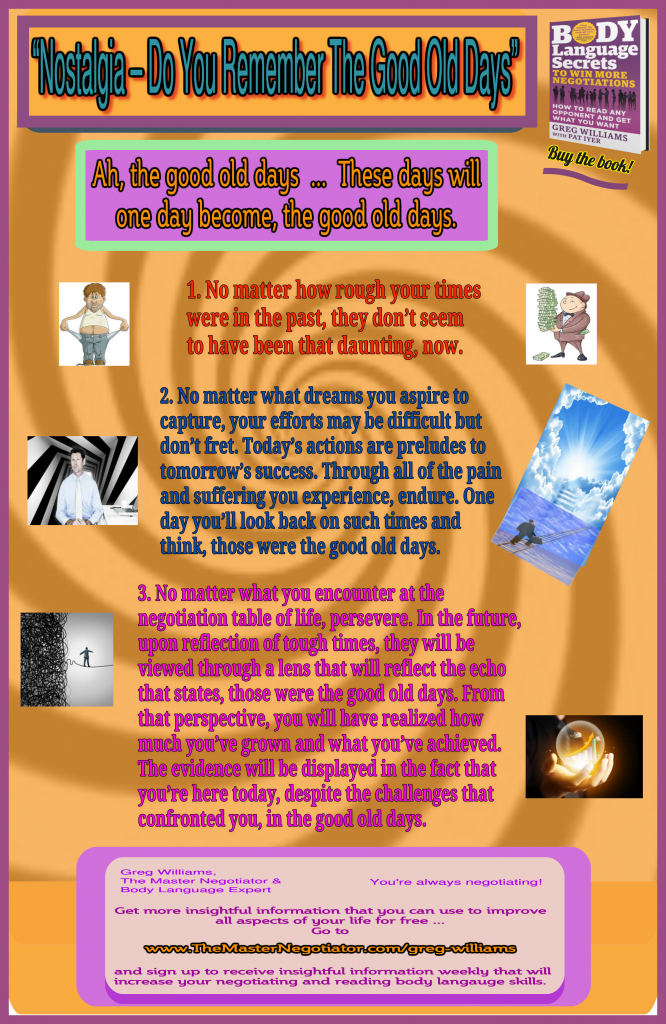 “Nostalgia – Do You Remember The Good Old Days”

He was humbled by the weight of his current circumstances. While reflecting on less challenging times, his smile beamed as he said, “those were the good old days.”

No matter the past experiences in your life, you can point to a period that brings fond memories to your mind. You probably consider such memories as, the good old days. Visiting those remembrances conjures images of times gone by. They warm your heart.

When you’re engaged with someone and the conversation heads in an unwanted direction from what you’re striving to achieve, seek to put that person in a state of nostalgia. You have to know what will stimulate them to possess such a state. What follows is how you can achieve that.

If the pace of speech has become somewhat accelerated, slow it down. Slowing down the pace of speech, from one that was previously accelerated, will serve to slow the pace of communications down. Studies suggest that this will cause the person with whom your speaking to think at a slower, more reflective pace. You’ll know to what degree you’ve achieved this state by an unfocused appearance in the eyes of the person you’re speaking to. Once you’ve succeeded at that, talk about the times they were happiest in their life. That will put them into something akin to a trance. From there, as long as they stay in that state, you’ll be able to bond and move them in the direction you wish them to go. That’s to say, as long as they perceive such direction as being beneficial to their wellbeing … and everything will be right with the world.

In a negotiation, altering the pace of speech is one way to alter and control the trajectory of the negotiation; invoking fond memories that the other negotiator experienced in the past is another.

Negotiators can get caught up in the moment. Their mind can become bombarded by thoughts of strategies and maneuvers they’ll implement. In such environments, things can become very tense. To diffuse the environment, go nostalgic. Do so by invoking fond memories that occurred in her past. If accomplished successfully, the level of tension will decrease, along with the level of resistance that previously existed in the negotiation. Prior to invoking this state, you should have prepared for the actions you’d engage in going forward. Now would be the time to implement such actions. Tie her current state of emotion to the outcome sought for the negotiation. That will be a powerful ploy!

You’ve more than likely heard that all is fair in love and war. The same is true when negotiating. Thus, when you’re in a tumultuous negotiation, try this tact and observe what occurs. You might be surprised by the reward of a better than expected outcome.