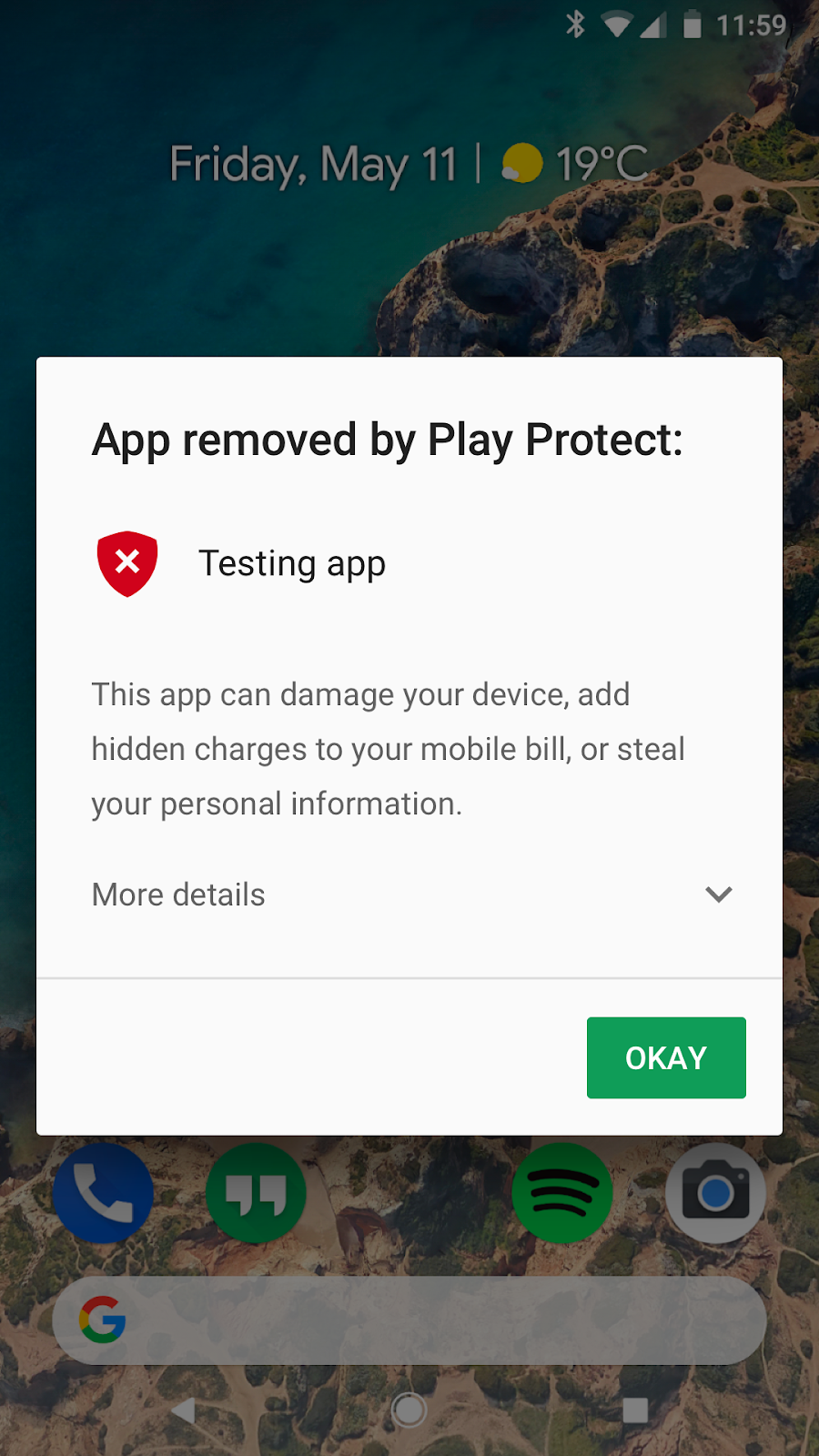 At Google I/O 2017, we introduced Google Play Protect, our comprehensive set of security services for Android. While the name is new, the smarts powering Play Protect have protected Android users for years.
Google Play Protect’s suite of mobile threat protections are built into more than 2 billion Android devices, automatically taking action in the background. We’re constantly updating these protections so you don’t have to think about security: it just happens. Our protections have been made even smarter by adding machine learning elements to Google Play Protect.

Google Play Protect provides in-the-moment protection from potentially harmful apps (PHAs), but Google’s protections start earlier.
Before they’re published in Google Play, all apps are rigorously analyzed by our security systems and Android security experts. Thanks to this process, Android devices that only download apps from Google Play are 9 times less likely to get a PHA than devices that download apps from other sources.
After you install an app, Google Play Protect continues its quest to keep your device safe by regularly scanning your device to make sure all apps are behaving properly. If it finds an app that is misbehaving, Google Play Protect either notifies you, or simply removes the harmful app to keep your device safe.
Our systems scan over 50 billion apps every day. To keep on the cutting edge of security, we look for new risks in a variety of ways, such as identifying specific code paths that signify bad behavior, investigating behavior patterns to correlate bad apps, and reviewing possible PHAs with our security experts.
In 2016, we added machine learning as a new detection mechanism and it soon became a critical part of our systems and tools.

In the most basic terms, machine learning means training a computer algorithm to recognize a behavior. To train the algorithm, we give it hundreds of thousands of examples of that behavior.
In the case of Google Play Protect, we are developing algorithms that learn which apps are “potentially harmful” and which are “safe.” To learn about PHAs, the machine learning algorithms analyze our entire catalog of applications. Then our algorithms look at hundreds of signals combined with anonymized data to compare app behavior across the Android ecosystem to find PHAs. They look for behavior common to PHAs, such as apps that attempt to interact with other apps on the device, access or share your personal data, download something without your knowledge, connect to phishing websites, or bypass built-in security features.
When we find apps exhibit similar malicious behavior, we group them into families. Visualizing these PHA families helps us uncover apps that share similarities to known bad apps, but have yet remained under our radar.

After we identify a new PHA, we confirm our findings with expert security reviews. If the app in question is a PHA, Google Play Protect takes action on the app and then we feed information about that PHA back into our algorithms to help find more PHAs.

Doubling down on security