S&P/Case-Shiller released the monthly Home Price Indices for March (“March” is a 3 month average of January, February and March prices).

From S&P: Home Prices Not Slowing Down According to S&P CoreLogic Case-Shiller Index

“The home price increases continue with the National Index rising at 6.5% per year,” says David M. Blitzer, Managing Director and Chairman of the Index Committee at S&P Dow Jones Indices. “Seattle continues to report the fastest rising prices at 13% per year, double the National Index pace. While Seattle has been the city with the largest gains for 19 months, the ranking among other cities varies. Las Vegas and San Francisco saw the second and third largest annual gains of 12.4% and 11.3%. A year ago, they ranked 10th and 16th. Any doubts that real, or inflation-adjusted, home prices are climbing rapidly are eliminated by considering Chicago; the city reported the lowest 12-month gain among all cities in the index of 2.8%, almost a percentage point ahead of the inflation rate.

“Looking across various national statistics on sales of new or existing homes, permits for new construction, and financing terms, two figures that stand out are rapidly rising home prices and low inventories of existing homes for sale. Months-supply, which combines inventory levels and sales, is currently at 3.8 months, lower than the levels of the 1990s, before the housing boom and bust. Until inventories increase faster than sales, or the economy slows significantly, home prices are likely to continue rising. Compared to the price gains of the last boom in the early 2000s, things are calmer today. Gains in the National Index peaked at 14.5% in September 2005, more quickly than Seattle is rising now.”
emphasis added 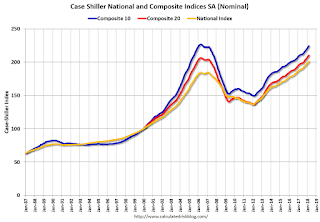 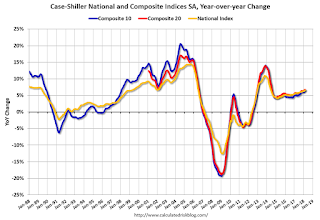 The National index SA is up 6.5% year-over-year.

Note: According to the data, prices increased in 19 of 20 cities month-over-month seasonally adjusted.