This gives a total of 4.28% delinquent or in foreclosure.

Today, the Data & Analytics division of Black Knight, Inc. released its latest Mortgage Monitor Report, based on data as of the end of April 2018. This month, leveraging both the Black Knight Home Price Index and Census Bureau income data, the company reports on how rising home prices and mortgage interest rates have affected housing affordability. While homes in much of the country are still more affordable than long-term norms, 19 states are either close to or past their long-term average affordability levels. As Ben Graboske, executive vice president of Black Knight’s Data & Analytics division explained, even the better-than-average income growth the U.S. has seen over the last few years has not been enough to keep up with rising home prices and interest rates.

“Last month, we reported that January and February 2018 saw faster rates of monthly home price appreciation (HPA) than the start of any year since 2005,” said Graboske. “While the pace of annual home price growth slowed a bit in March, HPA is still around 6.5 percent. We’ve also seen interest rates climb by nearly three-quarters of a percent so far this year. Together, those two factors have resulted in a $150 increase in the monthly payment on a 30-year mortgage used to purchase the median-priced U.S. home, about a 14 percent rise since the start of 2018. Stronger-than-average income growth in recent years still hasn’t been enough to keep up with rising HPA and interest rates. Seven states are now less affordable than their long-term norms and another 12 are close to hitting that point. Though much of the country remains more affordable than long-term norms, the current trajectory would change that sooner rather than later. We’ve modeled out multiple economic scenarios, some more conservative than others, and even with historically strong income growth, the current combination of home price and interest rate increases isn’t sustainable.
emphasis added 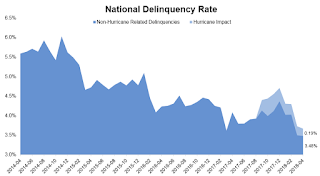 This graph from Black Knight shows the National Delinquency Rate since 2014, and the impact of the 2017 hurricanes.

• Of the 27K total reduction in national delinquencies, over 80% was attributed to hurricane recovery

• Hurricane-related delinquencies fell 19% (-22K) in April, with serious delinquencies attributed to the storms dropping by 15% (-16K)

• Without the hurricane effect, Black Knight estimates the national delinquency rate would be 3.48% (as opposed to the current 3.67%), 15% below April 2017 levels

• The upward pull is less than half the 45BPS seen last October, but it still remains strong 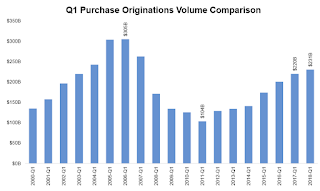 • The growth rate of purchase lending has moderated, from over 25% Y/Y in late 2015, to less than 10% in each of the past three quarters

• In fact, the 5% Y/Y increase in purchase lending was the lowest annual growth rate since early 2014, likely due to both normalization of growth as well as headwinds from tight housing inventory

• Average credit scores increased slightly in Q1 to 748 from 747 in the prior quarter, but have been hovering in the 747-748 range for the past four quarters