Recently was the first time that a baby has been allowed on the Senate floor, when Senator Tammy Duckworth brought her newborn to work. 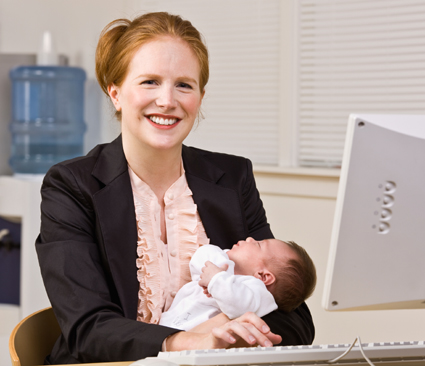 The request to change the rule was made by Duckworth herself, the first sitting senator to give birth, and was approved by unanimous vote. Senators are now allowed to bring a child under the age of 1 onto the chamber floor and breastfeed them during votes.

While the new rule has been heralded as groundbreaking, it has also been misinterpreted. It specifically addresses voting, as opposed to committee meetings and other senatorial responsibilities.

Even so, it has led to widespread discussion about new parents and whether it is time to rethink workplace policies with regard to babies and other young children. On social media, many have been vocal in their support for Duckworth and some have advocated for babies at work. Meanwhile, news commentators have weighed in, saying things like “it’s about time.”

But is it a good idea to bring babies to work?

Policies that allow babies in the workplace tell new parents that their contributions are valued. These policies seek to address work/life balance as well. In addition, they encourage bonding and nurturing, which is beneficial to families and society—and reflect positively on employer brand.

Such policies also address practical matters, like attendance. Presumably, bringing babies to work means employees will be able to engage in job-related tasks when they otherwise would not.

Yet, not all jobs involve sitting in a room, listening to someone speak, and voting. Workplaces are varied, and within one company there are often multiple work environments.

Allowing babies in an office environment may seem to make sense, where allowing babies on a factory floor would be less logical. How would a company handle these different environments? Would a policy stipulate that it depends on the employee’s work environment?

Office work areas, too, may differ greatly. Where one employee may have a private office, others may work in an open area or cubicles. Should a company allow babies in private offices only? If so, doesn’t this suggest that employees at a certain level are permitted to bring their babies to work while others are not?

As you can see, there are numerous considerations. And these are only a few. What age(s) would your company consider appropriate? Following the Senate’s lead and allowing for babies under the age of 1 may seem logical. But babies generally start crawling between 6 and 10 months, and they pull themselves up and stand between 8 and 10 months.

Is your workplace baby proof? Are electrical outlets protected? What about cabinets and drawers? As far as accommodations, does your restroom include a changing station?

There are other issues to carefully consider before allowing babies at work as well. Your insurance policy may not cover injuries to nonemployees. In addition, there may be legal issues associated with a babies-at-work policy. You’ll want to check with your insurance carrier and an attorney.

Finally, there are matters of a personal nature. Not all people have the same parenting skills. Is your company prepared to discuss parenting skills with an employee when her baby continually screams? Is this within the scope of your managers’ jobs?

Before you yes to a job candidate or employee who asks about bringing a baby to work, make sure you consider all the implications and address them as necessary.