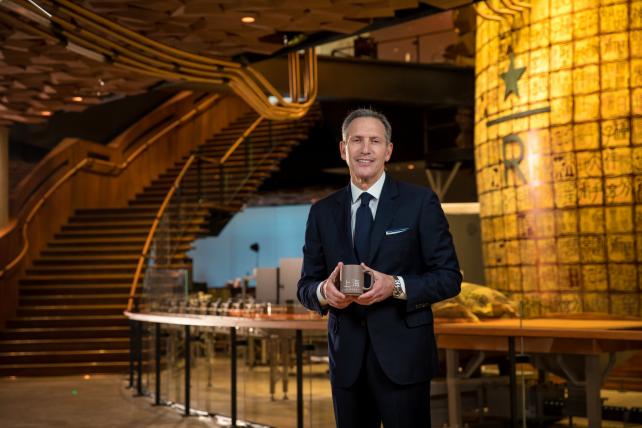 You can get an audio version of this briefing on your Alexa device. Search for “Ad Age” under “Skills” in the Alexa app.

Welcome to Ad Age’s Wake-Up Call, our daily roundup of advertising, marketing, media and digital news. What people are talking about today: Howard Schultz is stepping down as Starbucks’ executive chairman later this month. But that’s not the most interesting part. The New York Times asked Schultz straight-out if he was planning a presidential run, and Schultz didn’t shoot the question down. “I intend to think about a range of options, and that could include public service,” he said. In the same interview, he said he wanted to be truthful about his ambitions “without creating more speculative headlines.” But, um, surely Schultz realized his coy comments to The Times were the best way to unleash a torrent of speculation? Such as this headline in Fortune, asking, “Will [Schultz’s] next role be presidential candidate?” The New York Times chose an intriguing photo to illustrate its story; it shows Schultz in what looks like an Italian palazzo, complete with grand piano and candelabra, looking like a head of state on a visit abroad. Schultz 2020?

Insert dad joke here: David Axelrod, President Obama’s campaign strategist, tweeted this about the Starbucks exec: “There are already several dark horse candidates for ’20. How about a dark roast candidate?”