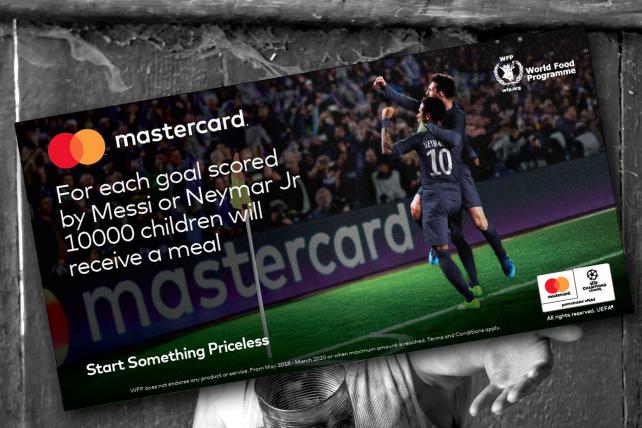 Mastercard is ending a meals donation campaign linked to soccer in Latin America after the push incited backlash earlier this week. The charity initiative, in support of the United Nations World Food Programme, was to give 10,000 meals to those in need for every goal scored by Mastercard brand ambassadors Lionel Messi and Neymar Da Silva Santos Jr. But consumers complained that the campaign was too gimmicky for an area such as hunger, and questioned why Mastercard wasn’t giving away the meals outright.

The decision to scrap the campaign, one part of a broader effort to end global hunger, was made less than 72 hours after the backlash began, says Raja Rajamannar, chief marketing and communications officer of Purchase, N.Y.-based Mastercard, in an episode of the Ad Age ‘Ad Lib’ podcast coming later this week.

“We said, ‘Let’s bring the focus back to the cause we are righting, not to this particular mechanic,'” says Rajamannar, noting that the goal-linked initiative was one of several campaign components, such as meal giveaways for hashtag use and matching consumer contributions. Since the overall campaign began in April, Mastercard has given away 400,000 meals. On Monday, Mastercard said it will adjust the campaign to one million meal donations in 2018, rather than linking meals to scored goals. “We want to reinforce that our 100 million meals commitment goes beyond any one campaign,” the company said in a statement.