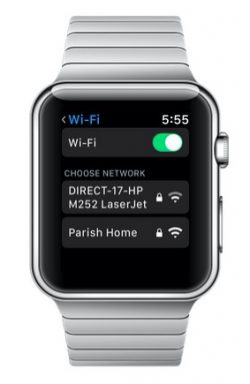 Testers of the first watchOS 5 beta for Apple Watch are hailing a new option in the software’s Settings menu that enables you to manually connect your device to nearby Wi-Fi networks.

In previous versions of watchOS, your Apple Watch is locked to the wireless network that your tethered iPhone is using, and there’s no way to browse and manually connect to networks from your wrist.

But that all changes in watchOS 5, if the beta 1 seed is anything to go by. Reddit user whiskey_91 found a new option in Settings where users can search for and connect their Apple Watch directly to available Wi-Fi networks when their iPhone is out of range.

After a network is selected from the list, users are prompted to enter the Wi-Fi password via Scribble (scribbling characters one by one on the screen with their finger), while using the Digital Crown to select lowercase/uppercase and special characters. A Join button then appears for users to tap and connect to the network.

The new Wi-Fi option appears on both Apple Watch Series 2 and Series 3 models, but we’ve yet to confirm whether it works on Series 1 (watchOS 5 doesn’t support the original Apple Watch, or Series 0).

There’s plenty more to look forward to when watchOS 5 gets its official release in the fall, but eager adopters are advised to stay patient while Apple works out the kinks. Apple temporarily pulled the watchOS 5 beta 1 seed from its developer portal in the early hours of this morning after reports that the software was bricking some devices.