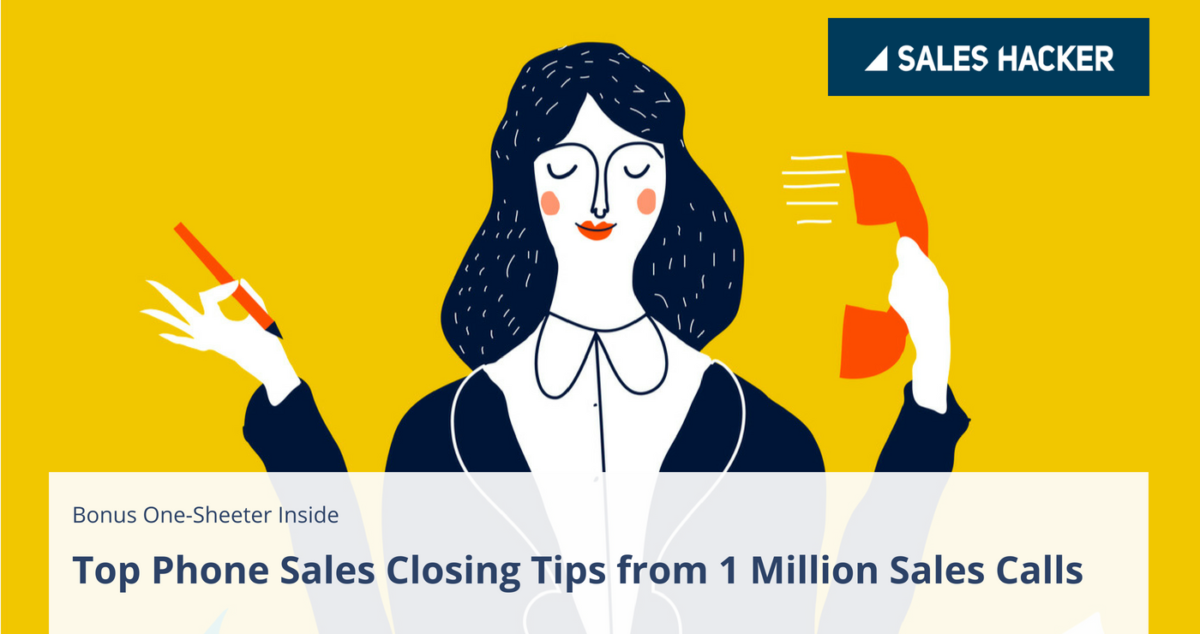 It might be scary to think that closing calls are out of your control, but it is and we have the data to prove it. Below are our top phone sales closing tips from 1M sales calls.Â

â€œAlways be closing.â€� The phrase is so popular in sales that itâ€™s practically the industryâ€™s unofficial motto.

But what if everything you know about closing is all wrong?

What if by the time your deal is â€œlate stage,â€� its fate has already been sealed? And, not even the fanciest closing technique can change that? The actions you took earlier in the sales cycle have already predetermined its outcome.

Closing is a Foregone Conclusion

Closing calls are a lot like the plot of one of the 90â€™s finest works of cinema, Armageddon. If a meteor were approaching earth, just a small change in its trajectory when it was still very far away could send it safely away from earth.

But if that same meteor gets too close to the finish line before we act, no amount of force (not even Bruce Willis) could change itâ€™s trajectory away from earth.

Closing calls are the same way. Late in the game, slick closing techniques donâ€™t have much of an impact on your buyer. Thereâ€™s no combination of words, no psychological principle you can exploit, that will sway your buyer on a closing call.

As conflicting as it may be for sales professionals to hear, closing is basically a non-event if you played your cards right early on.

How do we know?

We analyzed over one million sales calls with the help of machine learning to identify the trends and secrets hidden in the transcripts of the most successful sales calls.

Our initial analysis has been focused on different â€œtypesâ€� of calls: prospecting calls, discovery calls, demo/presentation calls, and now â€œclosing calls (the last call before a deal is either won or lost).

For every type of sales call up to this point, weâ€™ve uncovered surprises and debunked traditional sales wisdom. Our final type of call turned out to be a little different.

We analyzed metrics that have substantial impacts in other stages of the buyer’s cycle and found that they had little to no influence on closing calls.

At the beginning of the sales cycle, call duration matters enormously. Successful cold calls are almost twice as long as unsuccessful ones. But during closing calls, the difference is negligible. 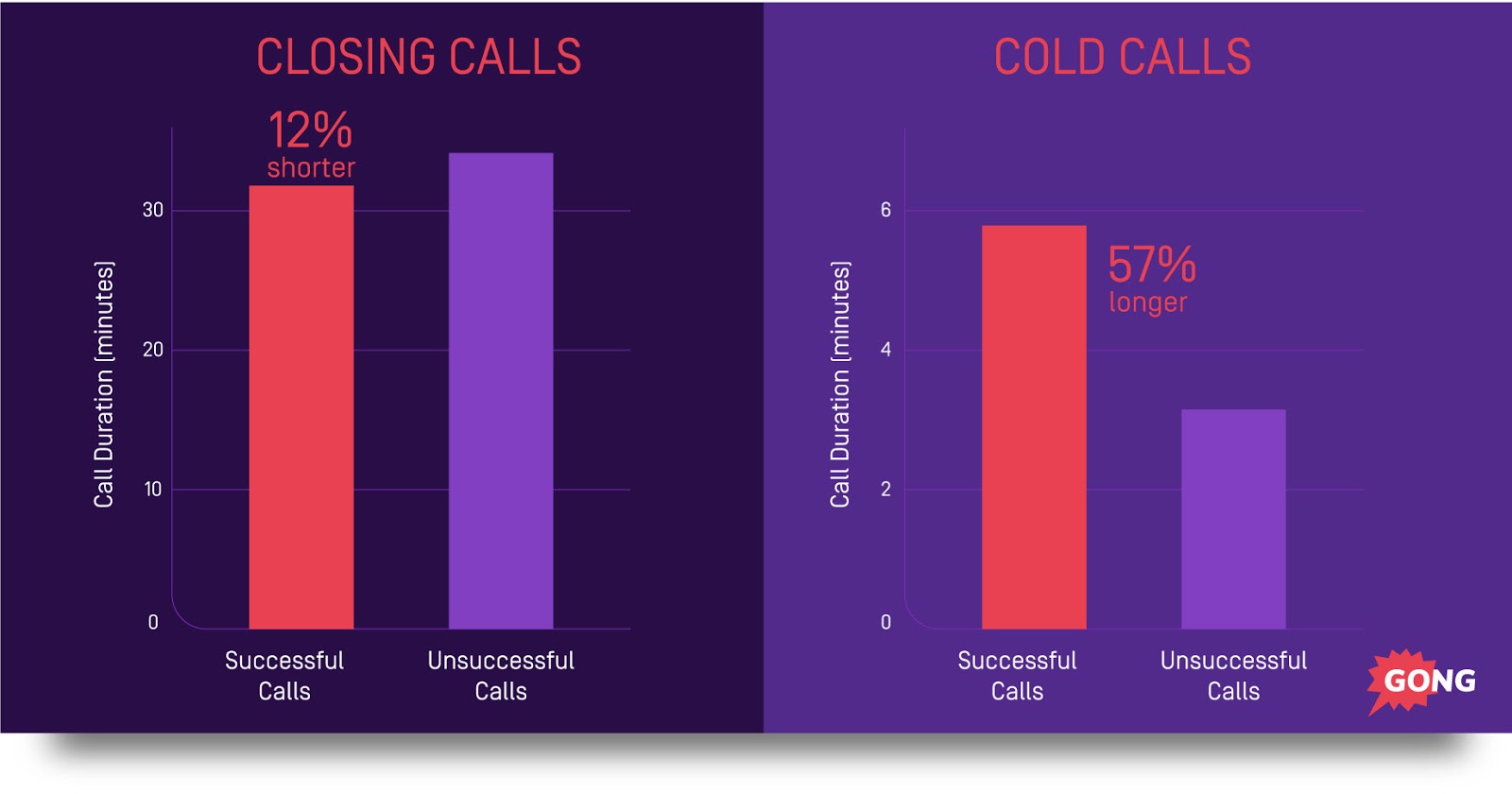 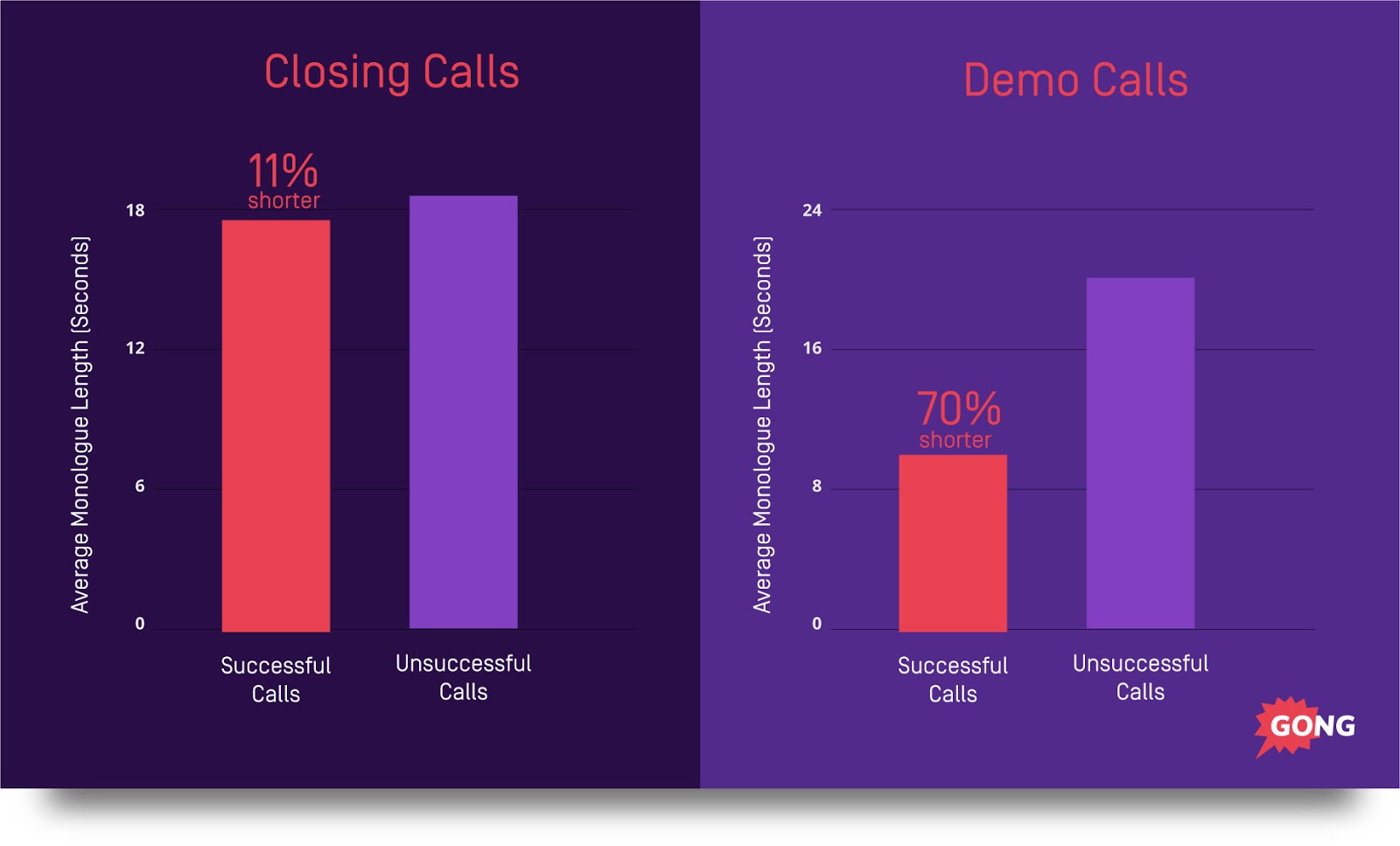 Even when handling objections, we see metrics like the number of speaker switches play a huge role, but have little to no impact on closing calls. 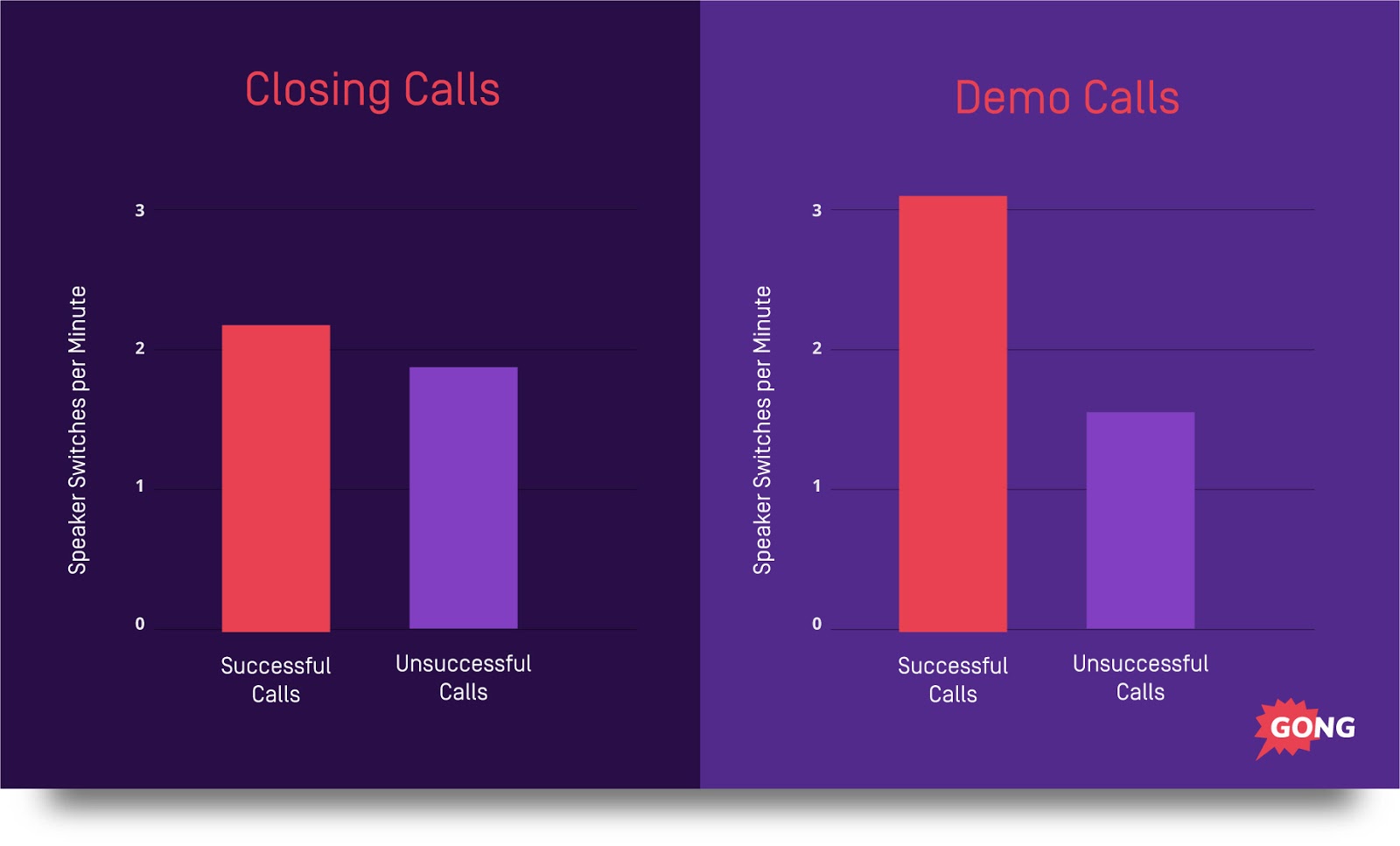 What does this striking similarity between successful and unsuccessful closing calls actually mean? It means that what you do upstream has much more impact on your dealâ€™s trajectory than what you do late in the game. You need to get it right early.

We did find ONE major difference between closing calls that result in a win and those that donâ€™t: the prospect (rather than rep) initiates the topics discussed. 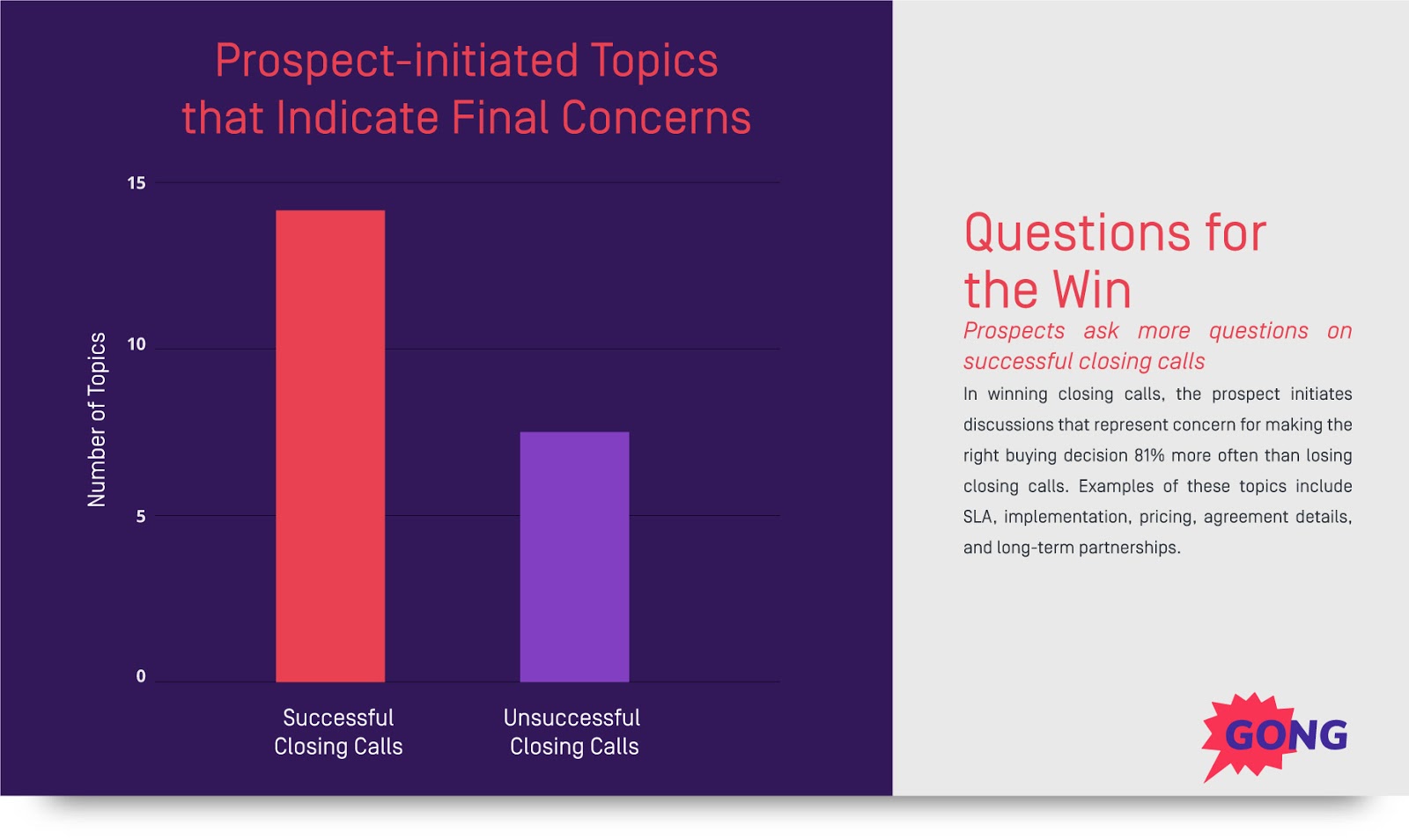 Keep in mind that these topics are initiated by the prospect, not the rep. That means that a reps role in closing calls is not to lay down a slick closing line. Quite the opposite in fact. Your job late in the game is leadership: lead your buyer calmly through their concerns.

If you did things right early in the sales cycle, guiding them through their concerns is the only step left before a successful close. Of course, part of employing leadership in this scenario is finally asking them to move forward decisively. But itâ€™s not a technique, itâ€™s a way of being. Itâ€™s character, not technique.

While closing calls lacked the patterns and insights for success of other types of calls, the takeaway is clear: perfect what you did upstream during the early and middle parts of the sales cycle.

In particular, learn how to nail your discovery calls. They are the most pivotal, outcome-defining moments of your deals.