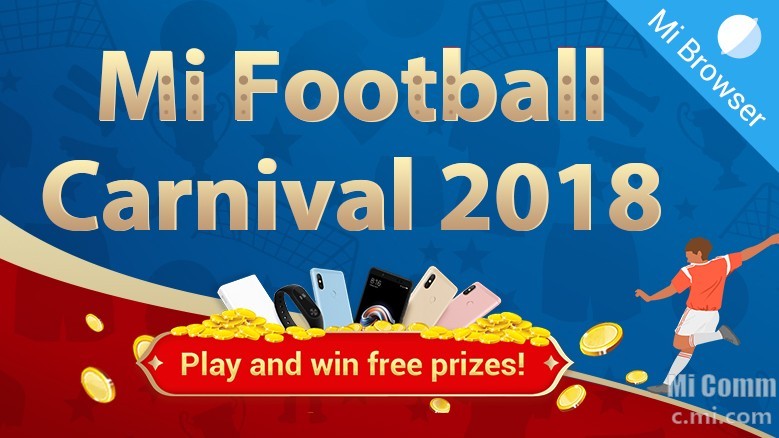 It’s the football season as the FIFA World Cup 2018 is underway in Russia, with the host country winning against Saudi Arabia in the first game. To celebrate the football season, many brands are announcing contests and prizes for football fans and now, Chinese smartphone maker Xiaomi has announced its own football carnival.

To play the Mi Football Carnival 2018, you need to have a Xiaomi smartphone and visit this link using the Mi Browser app. Once you visit the link, you will be able to view the upcoming games and take part in the Football Frenzy game.

In Football Frenzy, you have to guess whether a team is going to win, lose or the game will end up in a draw. If your answer is correct, you will get a chance to win one of the prizes and your reward coins will be credited in your account.

To be able to participate in the Football Frenzy, you will have to use 19 coins per game and to get these coins, you will have to participate in Daily Tasks, which will give you coins for each task you complete. In its post, Xiaomi has said that the coins used by the players and system generated coins will be added in a pool and all winners will get an equal amount of coins from this pool.

Apart from the Football Frenzy contest, Xiaomi has also announced a Lucky draw as part of the Mi Football Carnival 2018. Under the lucky draw, there will be five slots but only two will be available to users initially. The remaining slots will be available to users depending on their regular activity. The company has said that users have a better chance of winning the prizes if they have all 5 slots.

Just like Football Frenzy, you will have to use coins to participate in the lucky draw, which can be gained by completing daily tasks and participating in the quiz. To know the full rules of the Mi Football Carnival 2018, you can view the company’s post here.